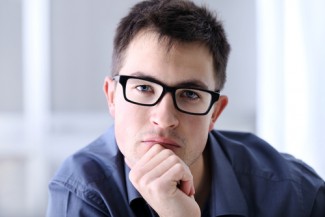 People trying to project intelligence may try to use big words and put on a poker face, but those tactics don’t work, studies suggest.

People who sprinkle long, complicated words in their writing are viewed as less intelligent by readers, according to a 2006 study in Applied Cognitive Psychology. Talking too much and too loudly, or being the first to blurt out an answer in a meeting may also backfire—those behaviors can be interpreted as insecurity, experts told the Wall Street Journal.

In a 2007 study, graduate students instructed to appear intelligent had four behaviors in common, and two didn’t work: putting on a serious face and avoiding gestures such as touching their face or hair.

But standing up straight and looking at others while listening or speaking created an impression of intelligence, the grad student study found.

Other behaviors that project intelligence are having a self-confident expression; speaking in a pleasant, expressive voice; and responding thoughtfully to others’ comments.

Wearing glasses also works, as does using a middle initial.

Carolyn Sandano recalled wanting to impress the lawyers who employed her as a marketing specialist at a law firm in her first major job after college. Asked for a software recommendation, she wrote a 30-page report with data and big words. But her boss never even read it. Instead, he told her “just boil it down for us,” Sandano told the Wall Street Journal.

She has since learned to ask questions, show interest in others’ ideas and take time to listen. “The thing I do that I find people respond to the most,” she told the Wall Street Journal, “is that I am really enthusiastic.”