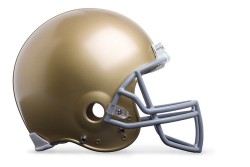 “No helmet system can protect you from serious brain and/or neck injuries including paralysis or death,” the label says. “To avoid these risks, do not engage in the sport of football.”

Rawlings followed Schutt’s lead when it added the same warning label to its football helmets, the New York Times reports. But the the nation’s largest helmet manufacturer, Riddell, doesn’t go so far as to suggest that avoiding football will also avoid the risks.

High-profile lawsuits are focusing attention on football helmets, the story says. In one suit, Riddell and the National Football League are accused of hiding evidence about the dangers of repeated head trauma. In another suit brought by an injured high school football player, a Colorado jury found Riddell liable for failing to adequately warn about possible head trauma. The company plans to appeal the $3.1 million verdict against it, awarded in April.

Jurors in the Colorado case did not find any design flaw in the Riddell helmets, and also found that several coaches were negligent for failing to address the athlete’s injury, ESPN reported. The company issued a statement after the verdict saying it remains steadfast in its belief that Riddell designs and manufactures the most protective football headgear for athletes.