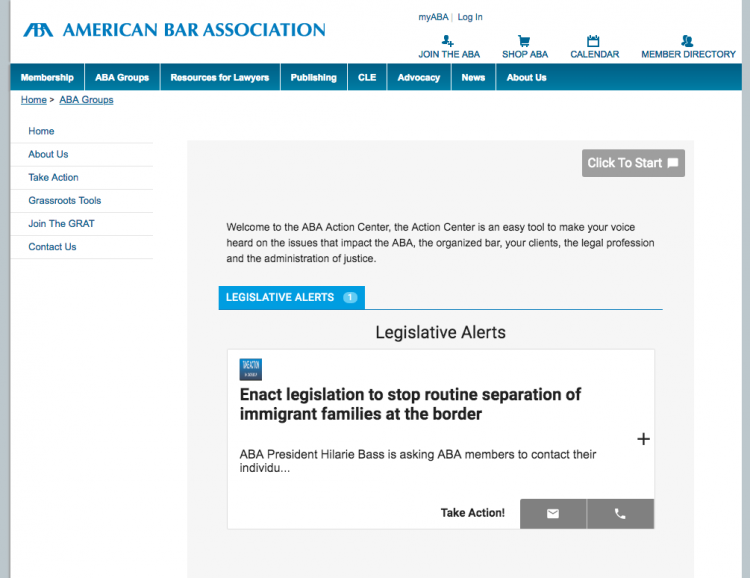 ABA President Hilarie Bass says Congress should pass legislation to stop separation of immigrant families, and she is directing like-minded individuals to an ABA Grassroots Action website that helps them make their voices heard.

Bass is calling for action at the same time a new group has formed to oppose separation. It is called Lawyer Moms of America, and it is planning a Day of Action on June 29, the Daily Kos reports.

Bass issued a statement on May 30 that called the forced separation of minor children from their parents “unnecessarily cruel.” In a June 12 letter to the U.S. Justice Department, Bass said the policy violates rights to family integrity and due process.

Now Bass is asking lawyers to contact their senators and representatives to pass a law that bars routine family separations at the border. “ABA staff and volunteers who provide legal services to children in border shelters have witnessed first-hand the traumatic effects of separation on these children and their parents,” she writes.

“We can differ on issues of national immigration policy, but don’t we all agree that it is simply shocking that hundreds of young children are separated from their parents just because their parents brought them across the U.S. border illegally?” Bass adds.

Visitors to the ABA Grassroots Action Center can click on “Take Action Now” to connect with their representatives through email or a phone call. Visitors are taken to a new page with arguments that can be used in support of legislation.

Lawyers can stress the due process implications of using family separation in the fight against illegal immigration, she says.

One example: “No court has ever condoned government action that uses law enforcement as a means to intentionally separate children from their parents. The first court to examine the current policy concluded that, as alleged in a pending complaint, the government’s conduct ‘shocks the conscience’ and violates constitutional rights to family integrity.”

Bass was apparently referring to a June 7 decision by U.S. District Judge Dana Sabraw that refused to dismiss a would-be class action suit that challenges the family separations.

Meanwhile, the new group Lawyer Moms of America hopes to hand-deliver a letter opposing family separations to every member of Congress on its Day of Action later in the month. The group was founded by four lawyers who are also mothers, though members need not be lawyers.