Was Brown v. Board of Education correctly decided? These judicial nominees won't answer 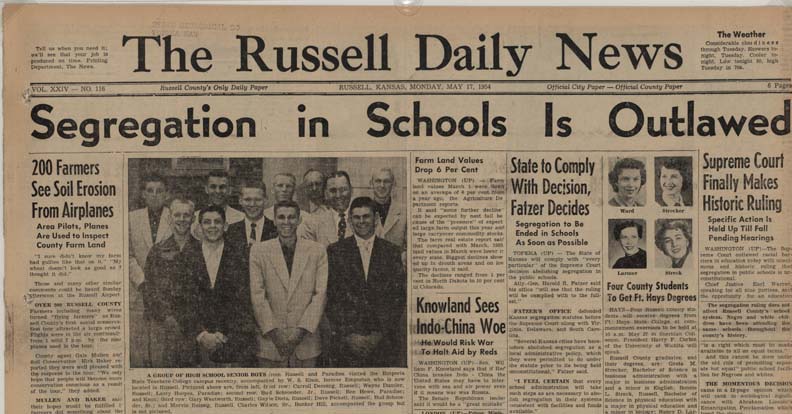 The front page of the Russell (Kansas) Daily News on May 17, 1954, announcing that school segregation is outlawed. (Library of Congress).

For around 60 years, conservative and liberal judicial nominees praised the school desegregation decision Brown v. Board of Education as a groundbreaking statement of equality by the U.S. Supreme Court.

Wendy Vitter, a nominee to the U.S. District Court for the Eastern District of Louisiana, said April 11 that she didn’t “mean to be coy” but she felt she didn’t want to comment on which Supreme Court decisions were correctly decided.

“If I start commenting on ‘I agree with this case’ or ‘don’t agree with this case,’ I think we get into a slippery slope,” she said. Vitter is general counsel to the Roman Catholic Archdiocese in New Orleans. PBS and the National Law Journal were among the publications with coverage of her hearing.

On Wednesday, Andrew Oldham, a nominee to the New Orleans-based 5th U.S. Circuit Court of Appeals, followed suit. Oldham said he could not discuss the merits of any case, including Brown v. Board of Education, Law360 reports. Oldham is general counsel for Texas Gov. Greg Abbott.

Law360 called Oldham’s refusal to answer “a trend among judicial nominees not to answer questions about Supreme Court cases like Brown v. Board of Education.”

The National Law Journal points out that the late Justice Antonin Scalia had refused to answer questions during his confirmation hearing about any specific opinion, including Marbury v. Madison. The landmark case is known for its holding that it is “the province and duty” of the judicial branch “to say what the law is.”

The Slate authors assert that as the Trump administration picks more unconventional judicial nominees, “ferreting out their fringiest views becomes an even greater imperative.”

“If nominees refuse to give their views about whether Brown was correctly decided, will they also refuse to give their views on Dred Scott, which refuted the very humanity of black Americans?” Slate asks. “What about the internment of Japanese Americans, which the court held lawful in Korematsu but has since been recognized as one of the most shameful moments in American political or legal history?”

ABAJournal: “The Brown v. Board of Education Question: What Would Scalia Do?”