The Hacktivists: Web Vigilantes Net Attention, Outrage and Access to Your Data 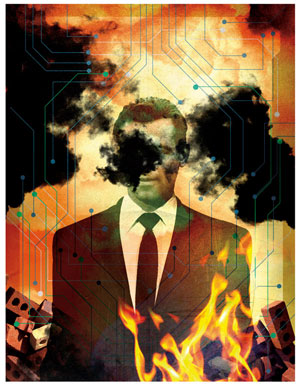 Law firms, security experts, international law enforcement agencies, major corporations and even the FBI are wrestling with a hard realization these days: From the darkest reaches of the Internet, a strange sort of “law” has come to town, and its name is Web vigilantism.

The tools of these “enforcers” are not new: Distributed denial-of-service attacks, website vandalism, hacks into stored information, and release of secret documents and personal data have all been used by computer-savvy intruders having fun, individuals expressing a gripe, protesters pressing a cause and criminals seeking illicit gain.

What’s new is a public bravado and political stance taken by the new vigilantes, or hacktivists, as some call them.

Among the most celebrated (and feared) of such groups is the one known as Anonymous, a loosely associated assemblage of hacktivists that gained national media attention claiming that had it disrupted business for some of the biggest corporations online. Much U.S. coverage dealt with Anonymous denial-of-service attacks in defense of Julian Assange and the WikiLeaks release of secret U.S. government emails.

Less known in the States is how Anonymous allegedly brought a computer security firm to its knees, tainted the career of the firm’s now-former CEO, hung the company’s law firm client out to dry—and so far has gotten away scot-free.

“Anonymous is heroic to many people who are sick of government lies and weary of government intrusion—unwarranted and warrantless—into the lives of U.S. citizens,” says Sharon D. Nelson, president of Sensei Enterprises, a legal IT/computer security firm in Fairfax, Va.

“They have become very much like, in the Terminator movies, the resistance fighting Skynet,” she says. “Many are script kiddies, or amateur hackers. But there is a core group of hackers who have extraordinary skills. They present one of the greatest security threats of recent years. And we have not, so far, done a lot to counter their intrusions.”

Click here to read the rest of “The Hacktivists” from the December issue of the ABA Journal.