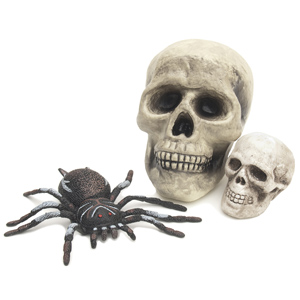 A West Virginia prosecutor has been suspended indefinitely for allegedly pulling a gun in response to a Halloween office display involving fake spiders.

The Oct. 5th incident occurred after several secretaries put up Halloween decorations in the prosecutor’s office, Logan County Prosecutor John Bennett said. Many fake spiders were included in the decorations.

“(White) said they had spiders everyplace and he said he told them it wasn’t funny, and he couldn’t stand them, and he did indeed get a gun out,” Bennett told the station. “It had no clip in it, of course they wouldn’t know that. I wouldn’t either if I looked at it, to tell you the truth.”

Bennett, who was out of the office at the time, said that White didn’t point the gun at anyone or wave it around. But he did threaten to shoot the spiders, which scared three secretaries who witnessed the incident, said the prosecutor.

“Quite naturally, the ladies were concerned, as I would have been. Anybody would be, I would think, with a gun, no matter where it was,” Bennett said.

Bennett has since banned guns from being carried in the prosecutor’s office, aside from the agency’s investigator. Logan County Chief Deputy M.A. Mays said his office has opened a criminal investigation into the incident. According to the Associated Press, Bennett made the decision to suspend White on Oct. 28, because his employees were still shaken by White’s alleged conduct.

White, a five-year veteran of the prosecutor’s office, could not be reached for comment, WCHS and the Associated Press report.