What can US and UK lawyers learn from each other about best practices? 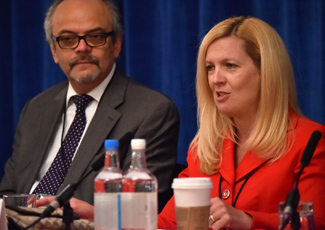 Jonathan Rosshandler and Wendy Venoit were panelists at the event. Photo by Simon Apps.

American and British lawyers can learn from each other and borrow examples of good practice from both systems to improve litigation and arbitration overall, attorneys said at a panel discussion at the ABA London Sessions on Saturday.

In recent years, international arbitration has borrowed good practice from both the U.S. and the U.K. legal systems, said Wendy Venoit, vice president and general counsel of Suffolk Construction Company Inc. in Boston, who has also participated in mediation and arbitration in the U.K. “I think we’ll see these procedures being used more and more as people see the benefits of it,” she said.

For example, in international arbitration, requests are more specific rather than a blanket request for everything, as happens in U.S. civil cases. “It forces you to think about what you’re asking for and tailoring your request to what is really necessary,” Venoit said. It also cuts down on discovery costs and would be a good introduction to the U.S. civil system, she said.

John Hinchey, a mediator and arbitrator with JAMS Global Engineering and Construction Panel in Washington, D.C., said borrowing good practice from each other is a convergence of various procedures as business becomes global. “The truth is we’re looking at the big picture,” he said.

The comments were made during the panel discussion, “A Connecticut Yankee in King Arthur’s Court: Do American Lawyers Have Any Place Litigating or Arbitrating in Foreign Jurisdictions?” The session was sponsored by the ABA Forum on Construction Law and co-sponsored by the Young Lawyers Division. Danielle Cole, a partner at Peckar & Abramson in Atlanta, moderated the panel.

The differences between the two systems originate in part from the philosophical underpinnings of the U.S. and the U.K. legal systems, Hinchey said. American lawyers consider litigation a way to discover the truth. 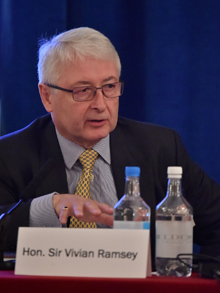 In the U.K., the court compels both parties to disclose all of their material at the start of the case, explained Sir Vivien Ramsey, a retired High Court judge who now works as an international arbitrator and mediator.

Jonathan Rosshandler of W Legal in London said American lawyers should want to adopt the British system of making all of their information available at the outset, rather than waiting for it to be revealed in discovery, which could take a year or longer. “Putting your case upfront is absolutely right,” he said. “You don’t have so many lines to follow to get to the truth.”

The differences between the two countries are not as great as some lawyers might think, Rosshandler said, who practices in London but has represented a number of American clients. “I think the differences are overstated,” he said.