What was Sen. Ted Cruz like at Harvard Law School? 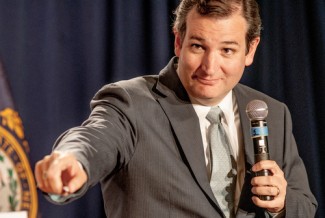 Sen. Ted Cruz was ambitious, charismatic and eager to debate liberals when he attended Harvard Law School from 1992 to 1995.

The Boston Globe interviewed Cruz’s classmates and decided he wasn’t much different than he is today.

Cruz, R-Texas, is a Tea Party Republican who seeks the limelight, the story says. Critics see him as “power-hungry, self-righteous, driven by single-minded political piety,” the story says. “None of which, to his former Harvard Law classmates, is surprising.”

At Harvard, Cruz “made a lasting impression as someone both arrogant and pretentious, as well as someone unwilling to yield or compromise,” the story continues. “But he was also universally respected for his intellect, described by friend and foe alike as brilliant but with a hard edge.”

Law professor Alan Dershowitz tells the Globe that Cruz was among the natural leaders at Harvard Law. (Others included Elena Kagan and Barack Obama, he said.) “There are students who come in with charismatic qualities who other people follow,” Dershowitz said. “He was one of them.”

The story includes some anecdotes. One classmate recalls the time she gave Cruz a ride from New York to Cambridge. “We hadn’t left Manhattan before he asked my IQ,” said the classmate, Melissa Hart. “When I told him I didn’t know, he asked, ‘Well, what’s your SAT score? That’s closely coordinated with your IQ.’ ”

Cruz had considered an acting career in high school and had a lead role in The Crucible, staged by the drama society at Harvard Law. But the second night of the play didn’t go well. After the first night, Cruz drank so much Everclear that he felt sick for the second performance and had to leave the stage during the play.

Commenting on the incident, Cruz told the Globe, “The young are not renowned for their wisdom. And that’s certainly not a principle from which I was exempt.”

Cruz also says he has mellowed since law school. “I suspect I was not the first 21-year-old who thought he knew more than he did,’’ Cruz told the Globe. “And one of the virtues of age, one of the virtues of getting married and becoming a father, is it often leads one to take a more measured approach to life.”