What's politics have to do with it? Reinvigorating our defense of state courts 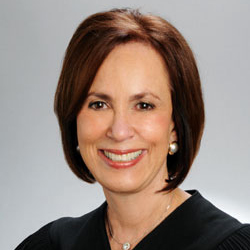 Politically motivated attacks on state court justices in merit retention elections based on disagreement with their courts' opinions have escalated significantly since 2010.

That year, when three Iowa justices were defeated as a result of their court’s unanimous opinion declaring same-sex marriage bans unconstitutional under their state constitution, a “send them a message” attack ad with scary background music declared:

Activist judges on Iowa’s Supreme Court have become political, ignoring the will of voters, and imposing same-sex marriage on Iowa. Liberal, out-of-control judges ignoring our traditional values and legislating from the bench, imposing their own values on Iowa. If they can usurp the will of voters and redefine marriage, what will they do to other long-established Iowa traditions and rights? Three of these judges are now on the November ballot. Send them a message. Vote “no” on retention of supreme court justices.

As used in Iowa, against images of Iowan hunters with guns and traditional Iowan families, buzzwords such as “activist,” “legislating from the bench,” and “ignoring the will of the people” can effectively influence citizens who may forget when viewing these ads that the judiciary’s very role is to be “fair and impartial”—not influenced by popular opinion, polls, politics, or special interests.

Several U.S. Supreme Court Justices have explained the basic tenet of judicial independence. Former Chief Justice William Rehnquist stated: “A judge is bound to decide each case fairly, in accord with the relevant facts and applicable law, even when the decision is not the one the home crowd wants.” Or better yet, former Justice Antonin Scalia, defending protesters’ First Amendment right to burn the American flag, explained the difference between judges’ personal or political views and their views when bound by the law: “If I were king, I would not allow people to go about burning the American flag. However, we have a First Amendment, which says that the right of free speech shall not be abridged.”

Former Justice Sandra Day O’Connor has more recently expressed her concern about special interests infiltrating the judiciary, stating: “I am anxious about the state of the judiciary in America. … What worries me is the manner in which politically motivated interest groups are attempting to interfere with justice.” And, concurring in Williams-Yulee v. The Florida Bar, Justice Ruth Bader Ginsburg declared: “Disproportionate spending to influence court judgments threatens both the appearance and actuality of judicial independence.”

The reality is that state court judges, unlike federal judges, are not protected from political winds, changing popular opinion, or special interest money. Rather, states employ a patchwork of different systems for judicial selection and retention that leave the judiciary vulnerable to attack. In fact, no state court mirrors the federal constitutional mechanism designed to ensure judicial independence: appointment with lifetime tenure with removal only for high crimes and misdemeanors.

Merit selection and retention, often referred to as the “Missouri plan” after the first state to enact these reforms in judicial selection, was once seen as a means of ensuring that judges and justices are appointed based on merit, not politics. Because judges and justices in states with partisan elections inevitably must campaign before the general public, the merit selection and retention system aimed to minimize the role of politics in selecting and electing state judges.

Despite efforts since the 1970s to remove politics from the judicial selection and retention process, considerable pressure has arisen in our nation to yet again politicize our courts. This is most evident in the attacks on state supreme court justices from Iowa in 2010, from Florida in 2012, Tennessee in 2014, and Kansas in both 2014 and 2016.

The American Board of Trial Advocates in its Spring 2015 Journal included an article titled “Preserving a Fair and Impartial Judiciary—the Cornerstone of Our Democracy, ” in which F. James Robinson and I described the challenge that judges and justices face in responding to these attacks. We explained that interest groups take “advantage of the vulnerability of state court judges who are constrained by many ethical limitations and by wise self-imposed restrictions on their public comments [by] open[ing] season on judges who they claim are out-of-step with the march of public opinion.”

Of course, when a court releases a controversial opinion, judges and justices are well aware that the legislature, the executive, the media, and the public may react. These days, any opinion that finds a statute unconstitutional or finds fault with the actions of the other two branches will often result in a flood of reactions and criticism. Of course, there is no problem with legitimate criticism of decisions as long as the criticism is based on accurate knowledge of the facts and law. The question is how we, as judges, maintain the integrity of the judiciary and respond to what may be an illegitimate, condemning reaction. As the Defense Research Institute stated in 2011 after the Iowa justices were not retained:

Judges must be dedicated to intellectual honesty and must demonstrate the ability to rise above the political moment to enforce the rule of law. Nothing can be more damaging to a society based on the rule of law than if judges fear that they will be removed from their office or that their livelihood will be impacted solely for making a decision that is right legally and factually but unpopular politically.

Ultimately, a politicized judiciary can never be truly fair and impartial and comply with its obligations to protect constitutional rights and liberties while catering to special interests. Thus, the very foundation of our government based on separation of powers is at risk.

All of that is to say that each of you can and should become a voice for judicial independence by becoming familiar with The Informed Voters Project—a nonpartisan voter education project launched by the National Association of Women Judges in 2014 to educate voters about the importance of a fair and impartial judiciary. I became involved in this project after my successful 2012 merit retention election.

The Informed Voters Project is a nonpartisan public education initiative developed by judges and lawyers to help stem the tide of unfair attacks on judges and justices and raise citizen awareness. As we explain: “Politics and special interests should have no place in American courtrooms.” We explain that judges should be evaluated based on their integrity, professional competence, judicial temperament, experience and service.” Our key messages that should resonate:

• Our courts should be celebrated as the one branch apart from politics.

• Judges should be evaluated based on their character and integrity.

• The courts must be protected by those who would politicize them.

• The public must be educated about special interest efforts to politicize the courts.

As IVP explains, “voters should be informed about the role of judges in our democracy and the essential principles that justice depends on fair and impartial judges.” It is critical that attorneys—as the nexus between the public and the judiciary that oftentimes guides public perception—help judges educate voters on this issue. The selection and retention of judges should be determined based on candidates’ character and integrity, not whether the most influential interest groups agree with the outcomes of decisions.

As Jim Robinson and I concluded our November 2016 Florida Law Review Article, “A New Era for Judicial Retention Elections: The Rise of and Defense Against Unfair Political Attacks:”

The only solution for preserving fair and impartial courts, then, is increased vigilance by the legal community and the public at large. Undoubtedly, attorney organizations, judicial organizations and civic groups should devote greater resources to improving civic education about the role of the judiciary to ensure that messages attacking judges on political grounds are critically met by an informed public, skeptical of blatant attacks the independence inherent in the design of the third branch of government. Preserving fair and impartial courts will depend on the resolve—of law students, lawyers, and leaders in all walks of life that cherish the foundation American democracy—to be proactive in protecting our state judiciaries from unfair political attacks.

Use your voices, utilize your advocacy skills, utilize your position in your communities to commit to ongoing education about the role of the judiciary in our democracy. All of us must be especially proactive in protecting our state judiciaries and judges from unfair political attacks stemming from disagreement with decisions. Act as if you had the most important client and the biggest case of your life. Act as if your future depends on it. It very well may.

Justice Barbara Pariente has served on the Supreme Court of Florida for the past 20 years and served as the Chief Justice from 2004-2006. Throughout her judicial career, which began in 1993, she has focused on upholding and advancing the importance of a fair and impartial judiciary. As a result of her efforts, Justice Pariente was recently awarded the Justice Sandra Day O’Connor Award for Judicial Independence by the American College of Trial Lawyers.