What's the most outlandish excuse you've heard someone give for being late to court? 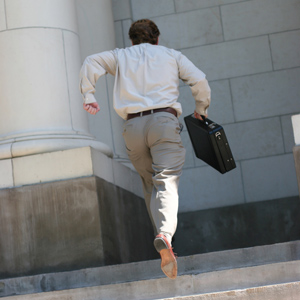 Last week, a Manhattan judge handed down sanctions in the amount of $12,000 for what he said was a lawyer’s repeated falsehoods about his tardiness.

In one such instance, attorney Carlos G. Garcia first claimed he was stuck in traffic during a missed court conference. Then he later claimed he had been in the Philippines “on a very urgent family matter” during that same conference, though his passport showed that he’d returned to the United States before the conference was scheduled, wrote U.S. District Judge Jesse Furman in his memorandum.

Though traffic is an ever-popular excuse, we’re sure our readers have heard some much wilder explanations for attorneys and clients being late or missing important court dates. Some of those excuses might even have been true!

So this week, we’d like to ask you: What’s the most outlandish excuse you’ve heard someone give for being late to court or for missing an important deadline? Do you know whether or not the excuse was valid?

Read the answers to last week’s question: How long is too long to stay in the same job?

Posted by Ellen: “It’s not about length of time but whether the job provides interesting and challenging work that helps me grow as a professional; acceptable work-life balance; and fair compensation. I stayed at my previous job eight years before leaving and in hindsight, could have left a few years sooner than I did, but for the fact that I was growing my family during those years. I love where I am now, and provided it continues to meet those three needs, I’d be happy to stay where I am now indefinitely.”