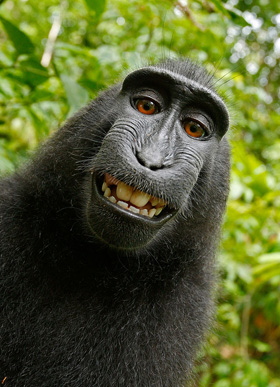 One of the monkey’s selfies from Wikimedia Commons.

A photographer does not own the copyright to selfies taken by a macaque monkey that picked up the photographer’s unattended camera and began snapping pictures, Wikimedia asserts in its first ever transparency report.

British nature photographer David Slater contends he owns the copyright to the photos taken during his three-day trip to the Indonesian forest in 2011, report the Telegraph and the Washington Post. Slater says the monkey that grabbed his camera apparently liked the sound of snapping photos and took hundreds of pictures, including the selfies and many out-of-focus pictures.

The Wikimedia Commons website, which is distributing the photos for free, has refused Slater’s take down request. “If the monkey took it, it owns copyright, not me, that’s their basic argument,” Slater told the Telegraph.

Wikimedia Foundation’s chief communications officer Katherine Maher says Slater’s characterization of its legal position is wrong. “Monkeys don’t own copyrights,” Maher told the Washington Post. She said that works originating from a nonhuman source aren’t covered by copyright unless a human makes substantial changes. “So what we found was that if the photographer doesn’t have copyright and the monkey doesn’t have copyright then there’s no one to bestow the copyright upon,” Maher said.

Slater told the Telegraph his trip to Indonesia was very expensive, yet he has made little money from the selfies. “For every 10,000 images I take, one makes money that keeps me going. And that was one of those images. It was like a year of work, really.” He says he is seeking legal counsel.