Who will Trump pick from his 'heartland' SCOTUS justice list? FantasySCOTUS launches contest with 22 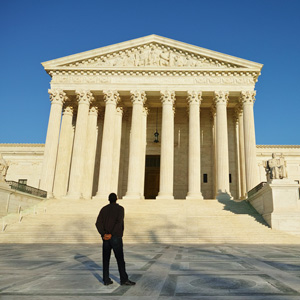 Who will Donald Trump pick as his nominee to the U.S. Supreme Court to replace the late Justice Antonin Scalia?

He already has a list of 21 potential nominees, all of them conservative. But they represent a break from recent tradition, the New York Times reports in a Sidebar column by Adam Liptak. Current conservative justices attended Harvard or Yale law schools, and they served on federal appeals courts in the Northeast or in California.

“If the list has a main theme,” the Times says, “it is that there are plenty of good judges who went to law school at places like Notre Dame, Marquette, the University of Georgia and the University of Miami. About half of Mr. Trump’s candidates sit on state supreme courts, and almost all those who sit on federal appeals courts do so in the heartland.”

Those who feel like making predictions on the next nominee can do so in a new #FantasyJustice tournament by FantasySCOTUS and LexPredict, according to Josh Blackman’s Blog. Blackman, a professor at South Texas College of Law Houston, is one of the creators of FantasySCOTUS. The #FantasyJustice list has the 21 names on Trump’s list, as well as U.S. Sen. Ted Cruz, R-Texas, who was backed by U.S. Sen. Lindsey Graham, R-South Carolina, during a Veterans Day event, Politico reported.

Lawyers who spoke with the New York Times told of their favorites from Trump’s list. They backed Judge William Pryor Jr. of the Atlanta-based 11th U.S. Circuit Court of Appeals, who has called Roe v. Wade “the worst abomination of constitutional law in our history”; Justice Joan Larsen of the Michigan Supreme Court, a former clerk to the late Justice Antonin Scalia; and Judge Margaret Ryan of the U.S. Court of Appeals for the Armed Forces, a former clerk to Justice Clarence Thomas.