Why (almost) no one is charged with gun trafficking in Illinois 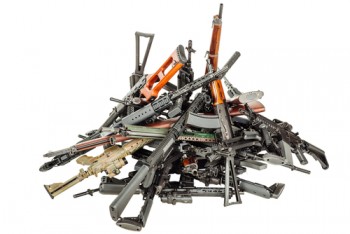 To understand why it’s so hard to stop the flow of guns across state lines and into cities like Chicago, you have to start with a simple, well-established fact: Firearms are legal products.

Guns aren’t like cocaine. As the Supreme Court has repeatedly ruled, most American adults are allowed to have them. That means there are millions of people who can acquire guns legally — and millions of potential sources of guns that may later be illegally sold, traded, loaned or stolen.

Regulations and restrictions vary by city and state, and most are loose. As we reported in a story on Oct. 10, the majority of the guns seized by Chicago police were originally bought out of state.

But even when authorities know a gun has changed hands unlawfully, they often can’t determine its ownership history.

“What comes between that first sale and the recovery is the question,” said Philip Cook, a researcher with the University of Chicago Crime Lab and a professor at Duke University.

It adds up to what some officials describe as a kind of law enforcement version of whack-a-mole: Police and prosecutors spend significant resources targeting people caught possessing illegal guns — who are usually at the end of a lengthy chain of ownership — with little hope of thwarting the illicit gun markets.

In the face of a two-year spike in violence in Chicago, authorities have stepped up their efforts to prosecute gun offenders. Through Oct. 4 of this year, federal prosecutors in the Northern District of Illinois had already brought more gun charges than in any other year over the last decade — with almost three months still to go.

But the vast majority of the defendants were charged with illegal gun possession, according to federal court records. In some cases the guns were allegedly brought to the Chicago area from out of state, but no one was charged with trafficking. The reason: No federal trafficking statute exists.

While a state trafficking law is on the books, prosecutors say the cases are hard to prove.

The most common charge: being a felon in possession of a firearm, which accounts for 73 percent of all gun charges in 2017. The others: using a gun in connection with drug trafficking (17 percent); selling guns without a license (8 percent); and making a false statement in a gun purchase (2 percent).

Over the last decade, the portion of gun defendants facing possession charges has doubled.

Neither the ATF nor the U.S. attorney’s office in Chicago would comment to ProPublica Illinois about their approaches to attacking underground gun markets.

Some federal authorities and lawmakers want to create another tool. U.S. Rep. Robin Kelly, the Democrat whose district includes parts of Chicago’s South Side and some adjacent suburbs, has cosponsored the Gun Trafficking Prevention Act of 2017, which would ban the purchase or sale of a gun with the intent to transfer it illegally.

She said such a measure would be critical for the Chicago area because surrounding states have looser gun laws than Illinois. Only three Republicans have signed on as co-sponsors, though, and the bill has been buried in committee since it was introduced in March.

At the state level, Illinois prohibits both trafficking guns from out of state and gunrunning, which is the illegal transfer of at least three guns. But police and prosecutors in Chicago almost never charge anyone with those offenses:

• Since 2007, nine of every 10 weapons arrests by Chicago police have been for illegal gun possession, according to the city’s reported crimes database.

• Similarly, since 2013, Cook County prosecutors have brought unlawful use of a weapon charges 9,724 times, according to data from the state’s attorney’s office. During the same period, they’ve charged defendants with gunrunning 12 times, and they haven’t charged anyone with gun trafficking.

The Chicago Police Department works with the ATF to trace every illegal gun it recovers, said Anthony Guglielmi, a department spokesman. But most have been sold, stolen or loaned out repeatedly.

“They can be on the street for years,” Guglielmi said. People “don’t get rid of guns here. They bounce around.”

Federal laws limit the ability of authorities to keep records, so no national gun registry exists. Because each state has its own regulations, officials are often unable to determine the entire ownership history of a gun. Without that history, it’s a challenge for local prosecutors to show gun trafficking occurred.

“If a car is used in a shooting or robbery, I can easily find out, in a matter of minutes, who owned that car,” said Eric Sussman, a former federal prosecutor who’s now the top deputy to Cook County State’s Attorney Kim Foxx. “Gun laws are intentionally set up where there is no searchable database.”

Even when authorities learn a gun’s history, building a trafficking or gunrunning case can be tough. The cases take significant time and resources to investigate, and the laws are narrowly written — for instance, only residents of Illinois can be charged with trafficking here, even though most guns in Chicago come from out of state.