Will the Supreme Court 'stay its hand' on gay marriage? SCOTUSblog's Goldstein thinks so

Oral arguments on the constitutionality of a California ban on gay marriage received widespread attention today, but the justices’ comments suggest the Supreme Court won’t reach the merits, according to SCOTUSblog founder Tom Goldstein.

Justice Anthony M. Kennedy is considered the swing voter on the case. Writing at SCOTUSblog, Goldstein says Kennedy “was deeply concerned with the wisdom of acting now” given the limited social science on the effects of same-sex marriage.

Goldstein sees two possible scenarios in which the court would “stay its hand for some time for society to develop its views further.”

Goldstein’s first scenario relates to the standing issue. California officials abandoned their defense of Proposition 8 banning gay marriage after a federal judge struck down the measure. Groups that had supported Proposition 8 stepped in to defend the initiative on appeal. The court could decide the initiative’s supporters lack standing in a majority made up of the liberals and Chief Justice John G. Roberts Jr., Goldstein says. 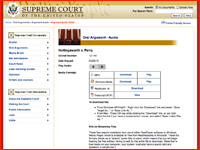 In the second scenario, the court would dismiss the case because of an inability to reach a majority. Kennedy had suggested the possibility during the arguments.

Either decision would be “a modest step forward for gay rights advocates, but not a dramatic one,” Goldstein says.

A standing decision by the Supreme Court would leave in place a trial judge’s decision striking down Proposition 8 because it violated a fundamental right to marry and denied equal protection to gays and lesbians.

A decision to dismiss the case would leave in place a decision by the San Francisco-based 9th U.S. Circuit Court of Appeals that struck down Proposition 8 because it took away the right to gay marriage previously established by the California Supreme Court. Once the California Supreme Court granted gays the right to marry, the 9th Circuit had said, taking away the right violated equal protection guarantees.

A SCOTUSblog post by Lyle Denniston, the Washington Post and The BLT: The Blog of Legal Times also have coverage of oral arguments. Kennedy “seemed strongly tempted to just take a pass,” Denniston wrote.

ABAJournal.com: “Will Justices Opt for ‘Offramps’ in Same-Sex Marriage Cases? Standing Is One of the Issues”