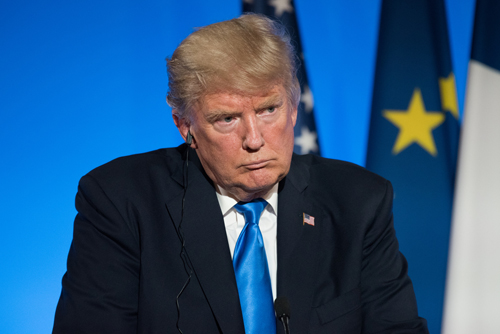 Two lawyers with Winston & Strawn turned down an offer to represent President Donald Trump because of conflicts, they said in a statement.

The lawyers are Dan Webb and Tom Buchanan, report the Washington Post, the Chicago Tribune, the Chicago Sun-Times and the Daily Beast.

The lawyers said they “consider the opportunity to represent the president to be the highest honor and they sincerely regret that they cannot do so. They wish the president the best and believe he has excellent representation in Ty Cobb and Jay Sekulow.”

Webb, who is based in Chicago, is a former U.S. attorney for Illinois who oversaw the Operation Greylord investigations into judicial corruption. Buchanan is head of Winston & Strawn’s litigation department in Washington, D.C., and is co-chair of the firm’s task force on the Foreign Corrupt Practices Act.

Though Webb is a Republican, he told the Chicago Sun-Times in July 2016 that supported Hillary Clinton in the election because Trump “is not fit to be president.”

Olson was asked about the impact of administration turnover. “I think everybody would agree this is turmoil, it’s chaos, it’s confusion, it’s not good for anything,” he said. “We always believe that there should be an orderly process, and of course, government is not clean or orderly ever. But this seems to be beyond normal.”

Barry Boss, Cozen O’Connor’s criminal defense and internal investigations practice co-chair, said there is a stigma associated with representing Trump. “Obviously, given the constant shuffle of attorneys in and out of the president’s legal team, one would be reticent to focus a significant portion of your practice on representing the president, only to find yourself on the sidelines a short time later because the president saw someone he liked better on Fox News,” Boss said.

Another white-collar defense lawyer who requested anonymity told the National Law Journal that many lawyers would relish the opportunity to represent a sitting president.

The White House had announced last week it was adding Fox News commentator Joseph diGenova to the president’s legal team, but diGenova later decided against representation because of conflicts. Trump’s personal lawyer, John Dowd, quit the team last week, reportedly because of a disagreement over legal strategy and his inability to control Trump’s behavior.