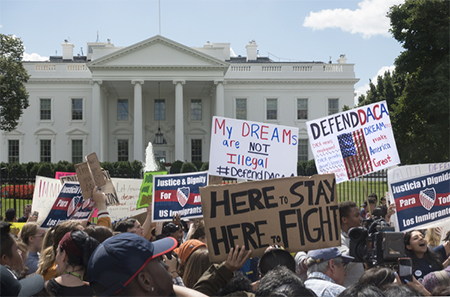 The U.S. Supreme Court has temporarily stayed a federal judge’s order requiring the government to turn over more documents regarding its decision to wind down a program protecting immigrants brought to the country illegally as children.

The court granted the government’s request for a stay on Friday evening in a 5-4 order (PDF), the Washington Post, the New York Times and SCOTUSblog report. The stay remains in effect while the court considers the government’s petition for a writ of mandamus or a cert grant.

U.S. District Judge William Alsup had ordered production of the additional records regarding the decision to end the program known as Deferred Action for Childhood Arrivals. In a 2-1 ruling, the San Francisco-based 9th U.S. Circuit Court of Appeals had refused to disturb the decision.

Breyer said the government “contends that review of its decision terminating DACA must be based exclusively on the documents that the government itself unilaterally selected for submission to the district court. I am not aware of any precedent supporting the government’s position.”

Alsup had taken the unusual step of filing a statement with the Supreme Court that said the Justice Department’s court filings had left an “incorrect impression” that he had “endorsed unfettered discovery” in the case.

Alsup said the government has cited “deliberative privilege” in withholding 84 documents, but he overruled the claim as to 48 of those documents after reviewing them.

The plaintiffs in the suit are the states are California, Maine, Maryland and Minnesota and the president of the University of California.