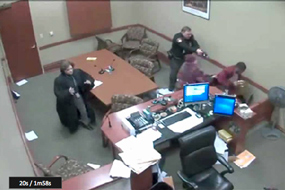 All was apparently well until a magistrate judge reportedly left an Ohio domestic violence courtroom during a Friday hearing last week to see if the respondent had any pending arrest warrants.

Almost immediately after the judge left and another woman entered the courtroom, a security video for the Summit County courthouse shows, Rashad Greene became agitated, leapt to his feet and ran around the courtroom table toward his unidentified ex-girlfriend. She told the Akron Beacon Journal that she had just explained to the judge she was afraid for her life and felt immediately fearful to be left alone in the room with Greene. The other woman who entered after the judge left, the newspaper said, is Greene’s grandmother.

The video shows the ex-girlfriend running toward the door as Greene’s grandmother tries to intervene but is shoved aside by her grandson. Then, as the target of his pursuit keeps going around the table, gaining ground, he reverses course and runs in the other direction around the table. The ex-girlfriend falls, starts to get up, and he slams into her, knocking her back perhaps 8 feet to a half-door leading to the bench and onto the ground, where he can be seen swinging at least one of his fists in her direction.

Meanwhile, the magistrate returns to the room just before a court bailiff, gun drawn, enters and apparently orders Greene (the video doesn’t have any audio) to stop the attack, which he does. A man in street clothes enters as the judge edges past Greene, held at gunpoint lying on the floor, and past the bench out of camera range, presumably headed into her chambers. Then a second bailiff arrives.

Greene is now being held on domestic violence charges. A community outreach director for the courthouse, Susan Tucker, said officials are reviewing security procedures. Greene’s ex-girlfriend wonders why she was left alone in the courtroom with him.

“The reality is, and I think most of us in the domestic violence field know, that anything can happen at any time,” Tucker told the newspaper. “And even if the magistrate had been there, if he had decided to do this, he would have done it anyway.”