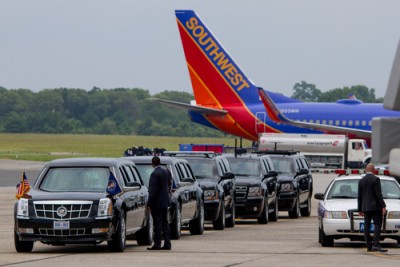 A Virginia woman has filed a lawsuit claiming the government contractor she worked for violated public policy by forcing her resignation for flipping off President Donald Trump’s motorcade last year.

The Geller Law Group and Protect Democracy filed the suit Wednesday on Briskman’s behalf. A Protect Democracy press release is here and the state court lawsuit is here. Among the publications covering the suit are the National Law Journal, the Washington Post and the Huffington Post.

Briskman was a marketing analyst at Akima. News photographers caught her gesture as she was bicycling last October alongside the presidential motorcade. Online images posted by the photographers went viral, and Briskman posted a photo to her Facebook page. She also disclosed the incident to her bosses.

Briskman says she was initially told she was being fired because the government contractor feared retaliation and because she violated company policy banning obscene content on social media. Briskman alleges inconsistent treatment of another employee, a senior director, who was allowed to remain with the company, despite calling someone “a f—— Libtard a——” in a Facebook discussion about Black Lives Matter.

Briskman agreed to resign based on a promise she would get four weeks’ severance pay and the company would not oppose a request for unemployment compensation. She says she received only two weeks’ pay.

The suit alleges unlawful termination and breach of contract. Her suit seeks compensatory damages and about $2,700 for the unpaid severance.

ABAJournal.com: “Worker is fired after flipping the bird at Trump motorcade; does she have a case?”