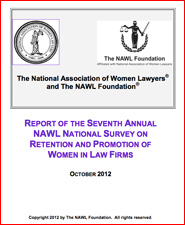 A National Association of Women Lawyers survey (PDF) of the country’s largest law firms recently found that 70 percent of the businesses’ staff lawyers were female. However, women only made up 15 percent of the firms’ equity partners.

Last year, the Careerist reports, women made up 55 percent of the staff lawyers at firms surveyed.

Also, according to the report, women partners are credited with smaller books of business than their male colleagues, even if their development efforts are significant. And while 50 percent of firms’ associates were women, they only received 40 percent of the bonuses.

Barbara Flom, the report’s author, told the Careerist that this year, they took a closer look at the relationship between compensation and median hours. According to her, women’s and men’s total hours were comparable, and it’s hard to decipher how firms surveyed make compensations decisions.