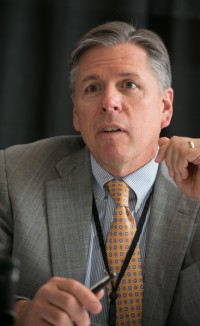 So-called low-tech lawyers who pine for the bygone days before the Internet, the cloud and social media will have to get used to the fact that there is no turning back from technology. But the future may not be as intimidating as it might seem.

That was the broad message presented Saturday at a program held during the ABA Annual Meeting in Boston. The program titled “The Low Tech Lawyer’s Guide to Ethical Competence in a Digital Age” was one of a series of showcase CLE programs being held today and Sunday as part of the new Magnitude 360 format of the Annual Meeting. The program was sponsored by the Center for Professional Responsibility.

Technology has changed how ethics rules apply to issues across the law practice spectrum. But the changes are primarily a matter of degree rather than overhauls of the actual substance of the rules. In the area of confidentiality, for instance, the days of protecting files of paper documents from loss or theft are gone, said panelist Daniel J. Crothers, a justice on the North Dakota Supreme Court who chairs the Policy Implementation Committee in the Center for Professional Responsibility. Today, Crothers said, “It’s different because with cybersecurity, there can be thousands of potential thieves. It’s a problem on a completely different scale than what we used to have.”

There might be a temptation to blame revisions to Rule 1.1 of the ABA Model Rules of Professional Conduct for the growing focus on technology. One of the revisions to the Model Rules that were adopted in 2012 by the ABA House of Delegates at the recommendation of the Commission on Ethics 20/20 added language to the comment to Rule 1.1, which requires a lawyer to provide competent representation to a client. The new language added knowledge about “the benefits and risks associated with relevant technology” to the definition of competence.

But there are limits to just how much lawyers are expected to know about technology under the revised Model Rule 1.1 and other changes being made in ethics rules to accommodate technology, said Andrew Perlman, a professor at Suffolk University Law School in Boston who served as chief reporter for the Ethics 20/20 Commission.

“The bottom line is reasonableness,” Perlman said. “You don’t have to be paranoid. No one is expecting you to be perfect.”

In efforts to protect the confidentiality of client information, Crothers said, “We have to assume that someone can get at the information we have. The question is what we can do to protect it.”

At the very least, lawyers should know how to develop strong passwords that will be more difficult to compromise. A strong password has at least 12 characters, Perlman said, mixing letters, numerals and special characters, with at least one capitalized letter. Your cat’s name, your birthdate or password123 are not strong, he said.

The ABA will soon introduce a new website that will answer questions about data security in ways that ordinary lawyers can understand—even low-tech lawyers.