ABA honors 5 women for their service to the legal profession 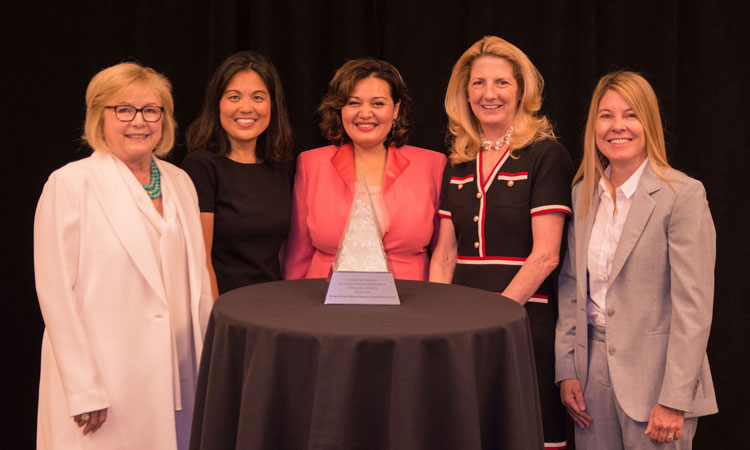 ABA President Bob Carlson invoked the spirit of Toni Morrison—the first African American woman to win the Nobel Prize in Literature, who died Aug. 5—at the Margaret Brent Awards luncheon at the ABA Annual Meeting in San Francisco on Sunday.

“The women we are honoring today, Raquel Aldana, Michelle Banks, Kelly Dermody, Judge Judith McConnell and Julie Su, by their language have touched the lives of many.”

The ABA Commission on Women in the Profession established the Margaret Brent Women Lawyers of Achievement Awards in 1991 to celebrate female lawyers for their professional accomplishments and support of other women in the legal profession. The annual awards are given in honor of Margaret Brent, the first female lawyer who arrived in the colonies in 1638. She was a master negotiator, an accomplished litigator and a prominent figure in Maryland.

ABA President-Elect Judy Perry Martinez also celebrated this year’s five honorees, telling them that they “shine brightly as examples of what true devotion to the advancement of women in our profession looks like.”

“This work matters, your efforts are noticed,” she said. “What you do moves the needle. In fact, some of us would proudly say that what you do scratches the vinyl.”

Aldana is the associate vice chancellor for academic diversity at the University of California at Davis, and a professor at its law school. She joined UC Davis in 2017 after 17 years as a professor at the William S. Boyd School of Law at the University of Nevada, Las Vegas and the McGeorge School of Law in Sacramento, California, where she also served as associate dean for research. She is an immigrant from Central America and a first-generation college and law school graduate.

She founded and directed the Inter-American Program to train bilingual and bicultural lawyers for transnational careers or to work with the growing Latino population in the United States. She serves on the ABA Council for Diversity in the Educational Pipeline and has served on the Latin America and the Caribbean Council of the ABA Rule of Law Initiative.

Meaning of Margaret Brent Award: “It’s an honor, and I feel like I’m receiving it on behalf of every young lawyer, particularly women lawyers, particularly lawyers of color, who are trying to use law for social change. It’s a recognition of those efforts on their behalf as well.”

Banks is a senior adviser at BarkerGilmore, where she provides executive coaching to general counsel. She started her career with Sheppard, Mullin, Richter & Hampton and then joined Morrison & Foerster as an associate. She later worked in Tokyo at ITOCHU Corp., one the largest trading companies in Japan. She also worked as the first female legal counsel for the Golden State Warriors before becoming general counsel of Gap Inc.

She is the co-founder and co-chair of UCLA Law Women LEAD, a network of almost 2,000 law students and alumnae at her alma mater focused on leadership, empowerment, advancement and distinction for female lawyers. She also served with the ABA Commission on Women in the Profession, where she promoted gender equity, particularly in compensation.

Meaning of Margaret Brent Award: “It is quite an honor for me to now be recognized with the award since I am very personally familiar with the process of how competitive it is in selecting the winners. The other thing I would say is a lot of women lawyers who I really admire have been recognized with the award, so I feel like I’m joining this incredible club of accomplished, inspiring women who help other women, which means a lot to me.”

Dermody is managing partner of the San Francisco office of Lieff Cabraser Heimann & Bernstein. She chairs the firm’s Employment Practice Group and specializes in class and collective actions on behalf of employees and consumers. She is currently representing female employees of Google who allege that the tech giant engaged in multiple pay and promotion violations.

She is a past president of the Bar Association of San Francisco and a past member of the ABA Labor and Employment Law Section Governing Council. She also previously served as co-chair of the section’s annual conference, Committee on Diversity and Inclusion in the Legal Profession and the Equal Employment Opportunity Committee.

Meaning of Margaret Brent Award: “I would say that I have been thoroughly inspired and motivated as a lawyer to work on behalf of women. I have just had decades of incredible clients who have done incredible things and have been part of the cultural landscape of elevating issues of gender bias and equity to where we are today.”

McConnell was the first female presiding judge of a major metropolitan court in California. She was appointed to California’s Fourth District Court of Appeal in 2001 and has served as the administrative presiding justice since 2003. She also served for 23 years as a trial judge in San Diego. In 1970, she was a founding member of the San Diego chapter of the National Organization for Women.

Meaning of Margaret Brent Award: “It means a lot. It is recognition for the many years that I have worked to improve the legal profession, both for women lawyers and for women in the community that we can better serve. And for men, because men are better served when the courts are fair and impartial.”

Su is the secretary of the California Labor and Workforce Development Agency. She was appointed by Gov. Gavin Newsom in 2019 to serve as his cabinet adviser on labor issues and employment programs for workers and businesses. She is the daughter of Chinese immigrants who began her career through a Skadden Fellowship at Asian Americans Advancing Justice – Los Angeles (formerly the Asian Pacific American Legal Center) in 1994.

She served as California labor commissioner, where she enforced the state’s labor laws to ensure a fair and just workplace for both employees and employers. She implemented several campaigns to educate low-wage workers and their employers about workers’ rights, including the first “Wage Theft is a Crime” multimedia, multilingual statewide campaign.

Meaning of Margaret Brent Award: “It’s such an honor to be recognized with a women’s award alongside these incredible women, especially now where it feels like so much is going backward and like so much of what we care about is under constant assault. It feels like being embraced at a time where we need to embrace each other.”

The ABA Commission on Women in the Profession has more information about the Margaret Brent Women Lawyers of Achievement Award and its recipients.