A poll worker helps a voter access her ballot at Keevan Elementary School on Aug. 4 in St. Louis. (Photo by Michael B. Thomas/Getty Images)

Steve Sandvoss knows from experience that attorneys are well-suited to serve as poll workers.

“They understand the law,” he says. “Election judges are trained to follow the election code in the state, and lawyers being who they are might be (a) more familiar with it in general, or (b) will pick up on it really quickly.”

Sandvoss joined the Illinois State Board of Elections more than 30 years ago, first becoming its general counsel in 2004 and then its executive director in 2015. He appears in a video the ABA, National Association of Secretaries of State and National Association of State Election Directors released as part of their Poll Worker, Esq. initiative, which aims to mobilize lawyers to assist as poll workers in the upcoming 2020 election.

ABA President Patricia Lee Refo, who also appears in the video, says lawyers are particularly needed this November. States expect a shortage of poll workers because of the pandemic.

“Poll workers are essential to free and fair elections,” she says. “Often, the folks who are experienced poll workers also are in high-risk groups for COVID-19. So the idea is to see if we can’t muster an army of lawyers and law students and other legal professionals who can help our elections run smoothly, fairly and without a hitch.”

Refo recently registered to serve in her home state of Arizona, where poll workers are called on before and during the election. Depending on the state, tasks include processing returned ballot envelopes and staffing polling places, according to an ABA press release.

Refo also sent a letter on Sept. 11 to Sen. Mark Warner, D-Virginia, who asked the ABA to help address the critical shortage of poll workers. She highlighted the Poll Worker, Esq. initiative and the Standing Committee on Election Law’s website, ambar.org/vote, which features the video, instructions for registering as a poll worker and other resources related to the election.

One of these resources is the Governmental Affairs Office’s ABA Election Center. It provides visitors with information on how to vote, update their existing registration, check their state’s mail-in or absentee voting rules and locate their nearest polling place.

Refo pointed out in her letter that the ABA launched a social media campaign using the hashtag #PollWorkerEsq on its Twitter, Facebook and LinkedIn accounts. The association is also asking state and local bar associations, affinity bar associations, legal organizations and law schools to get involved and help promote the effort. 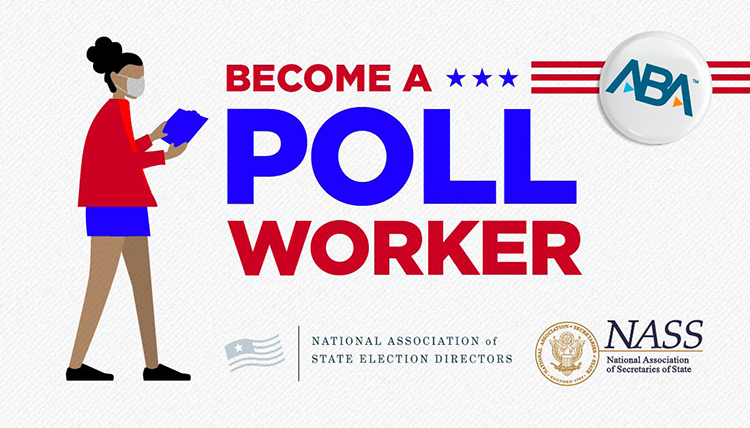 “Free and fair elections are the cornerstone of our democracy, and all people eligible to vote should be able to do so easily, safely and securely,” she wrote. “Ensuring that all jurisdictions have an adequate number of poll workers is essential to that goal, and the ABA and its members will continue to do our part.”

Sandvoss adds that election authorities are taking precautions to protect both poll workers and voters amid the COVID-19 pandemic. In Illinois, they will provide hand sanitizer and disinfectant wipes in polling places, require poll workers to wear masks and supply masks to voters who need them.

“Plus, a more abstract type of protection would be encouraging people to vote by mail and limiting the need to even go into the polling places because obviously, the less people, the less risk of being exposed,” he says.

Along with its other initiatives, the Standing Committee on Election Law aims to develop ways to improve the electoral process. Since 2001, it has published several versions of its “Election Administration Guidelines and Commentary,” which address such issues as voter education, registration and provisional voting.

At the ABA Annual Meeting in August, the House of Delegates adopted the 2020 version of the guidelines and recommended that “all election officials ensure the integrity of the election process through the adoption, use and enforcement” of them. 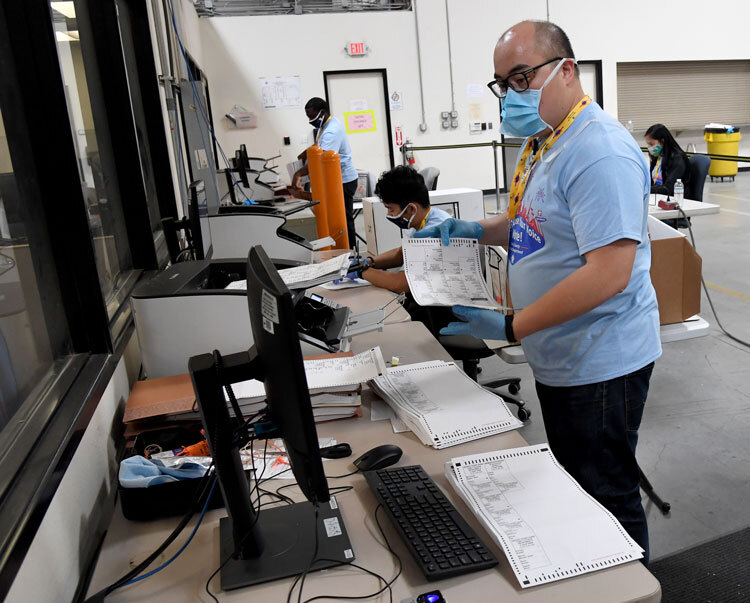 The updated guidelines contain a new section that focuses on emergency management of elections. While prior policy addressed holding elections during natural disasters, the standing committee points out in its report accompanying the resolution that it also seeks to “provide a roadmap for conducting elections during public health and other emergencies.”

Several entities, including the Standing Committee on Election Law and Section of Civil Rights and Social Justice, sponsored a panel discussion on these updates on Sept. 2. In “How to Run An Election - the ABA Way,” Estelle Rogers, the chair of the Standing Committee on Election Law and moderator of the discussion, said there are thousands of election jurisdictions in the United States, and they have many differences between them.

“Our guidelines are designed to cover a multitude of issues,” she said. “They will undoubtedly be revised again within a few years, especially with technology changing as it does and maybe as the COVID temporary fixes might end up being more permanent than temporary.

“These things bear a lot of watching. It’s in everyone’s interest for elections to run smoothly and to be fair.”

ABA Journal: “Ballot box battles are more high-stakes than ever”