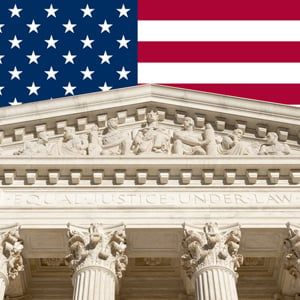 The ABA highlighted these gaps in Americans’ knowledge of history and government as part of the ABA Survey of Civic Literacy 2019, the first comprehensive survey of its kind by the association. The results of the nationwide poll of 1,000 people were released Wednesday to mark Law Day, a national event established by President Dwight Eisenhower in 1958 to recognize the country’s commitment to the rule of law.

“Democracy is not a spectator sport, but to participate, you need to know the rules,” ABA President Bob Carlson told the ABA Journal before the survey’s release. “That’s too important to leave to chance. The ABA conducted the survey to determine how well the American public understands the law, the Constitution and their rights and responsibilities. The results clearly show that we have more work to do.”

The survey, undertaken in conjunction with this year’s Law Day theme, “Free Speech, Free Press, Free Society,” pulled questions from the pool of 100 possible questions on the U.S. naturalization test. Only 5% of respondents correctly answered all 15 of the civics questions.

Carlson plans to join Chief Judge Roger Gregory of the 4th U.S. Circuit Court of Appeals at Richmond, Virginia; Gene Policinski, chief operating officer at the Freedom Forum Institute; and Ruthe Catolico Ashley, chair of the ABA Standing Committee on Public Education, at the Newseum in Washington, D.C., on Wednesday. The panel will provide insight into the survey’s findings on civic knowledge and support for the First Amendment.

According to the survey, a majority of Americans understand the structure of government and the Constitution. Nearly 90% know the preamble to the Constitution’s first words are “We the People;” 93% identify the two chambers of Congress as the Senate and House of Representatives; and 95% recognize the U.S. Supreme Court as the highest court in the nation.

However, less than half know that John G. Roberts Jr. is chief justice of the Supreme Court. Almost one-quarter think the chief justice is Ruth Bader Ginsburg, and 16% think it is Clarence Thomas.

If the president and vice president can no longer serve, 61% correctly identify the speaker of the House of Representatives as the nation’s next leader. But a little over one-quarter think the responsibility falls to the secretary of state.

Additionally, nearly three-quarters of respondents know that the president is the commander in chief of the military. But 16% incorrectly think the secretary of defense fills that role.

The ABA said survey respondents also lack a basic understanding of rights and responsibilities afforded under the Constitution:

• Less than half know only U.S. citizens can have an elected federal office position.

• 30% mistakenly think noncitizens do not have the right to freedom of speech.

• 15% incorrectly think due process is only available to U.S. citizens.

The ABA Survey of Civic Literacy 2019 also assesses the public’s thoughts on the First Amendment.

Three-quarters of Americans agree that the government should not prevent the media from reporting on political protests. Eighty percent think people and organizations should have the right to request government records or information; and 81% think people should be able to publicly criticize the president and other government leaders.

But despite strong support for the First Amendment, the ABA said the survey revealed some confusion over its protections:

• Nearly 20% mistakenly said freedom of the press is not in the First Amendment.

• Nearly 20% said the right to peaceably assemble does not fall under the First Amendment, either.

• More than half incorrectly think the First Amendment does not permit the burning of the American flag in political protest. The Supreme Court ruled in 1989 that a person cannot be penalized for flag burning under the amendment.

“American democracy does not function without a fully informed citizenry,” Carlson told the ABA Journal. “As Justice Sandra Day O’Connor said: ‘The practice of democracy is not passed down through the gene pool. It must be taught and learned anew by each generation of citizens.’ “

Since her 2006 retirement from the Supreme Court, O’Connor has been a dedicated advocate for civics education. O’Connor was a special adviser to the ABA Commission on Civic Education in the Nation’s Schools.

The ABA conducted the ABA Survey of Civic Literacy 2019 from Feb. 20 to March 5 using AmeriSpeak, the panel-based research platform of the NORC (formerly known as the National Opinion Research Center) at the University of Chicago.

The White House released a proclamation for Law Day on Wednesday that stressed the importance of the rule of law. “The rule of law requires that no one be above the obligations of the law or beneath its protections, and it stands as a bulwark against the arbitrary use of government power,” President Donald Trump wrote.

Updated at 10:58 a.m. to link to the White House proclamation.