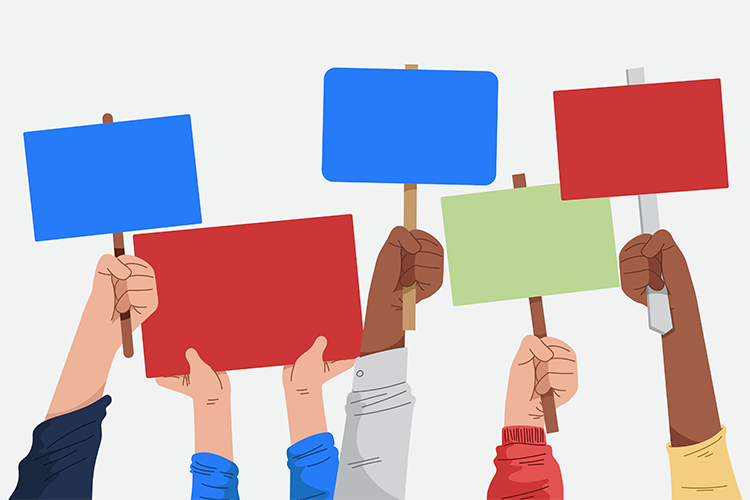 A federal appeals court has rejected the restrictions on political activities that had been imposed on judiciary workers.

In its opinion Tuesday, a three-judge panel of the U.S. Court of Appeals for the District of Columbia Circuit sided with Lisa Guffey and Christine Smith, who work at the Administrative Office of the U.S. Courts but want to support specific candidates in elections in their personal time. Since 2018, the office has prohibited these activities, a move that the court said violates the First Amendment’s free speech clause.

In its code of conduct, the Administrative Office of the U.S. Courts prohibits a series of activities related to partisan politics, including expressing opinions about political candidates or parties on social media, wearing or displaying partisan badges or signs, and contributing money to political campaigns, according to the opinion.

After Guffey and Smith sued the Administrative Office of the U.S. Courts, a district court granted them partial summary judgment and permanently enjoined several of the restrictions. It also granted the office summary judgment on a challenge to two other restrictions, which banned employees from driving voters to the polls on behalf of a political party and organizing events for political candidates.

The Administrative Office of the U.S. Courts argued that if its employees participate in political activities, it could undermine the public’s perception that the judiciary is an independent body. However, the D.C. Circuit said, Guffey and Smith are not judges and do not influence the outcome of cases.

“Even with eight decades of A.O. history to draw from, the A.O. has excavated no instance of off-duty political conduct by an A.O. employee that has injured the judiciary’s reputation,” according to the opinion. “That silent record is strong evidence that A.O. employees can speak on matters of public concern without tarnishing the reputation of the judiciary.”

The Administrative Office of the U.S. Courts also contended, among other things, that judges will no longer trust employees who engage in political expression in their personal time. The D.C. Circuit responded to this concern, calling it “implausible.”

“The A.O.’s argument focuses on the 30 or so employees who advise judges on sensitive matters like recusals and participation in outside activities,” the appeals court said. “That alone indicates that imposing the restrictions on all 1,100 A.O. employees—from the HR professional who processes a travel reimbursement to the IT-help-desk worker who assists a judge with a forgotten password—is not ‘reasonably necessary to protect the efficiency of the public service.’”

The D.C. Circuit said its analysis applied equally to all the Administrative Office of the U.S. Courts’ restrictions on political activities. The appeals court also said, however, that the injunction blocking those restrictions only applies to Guffey and Smith.

“The A.O. is a government entity with an independent duty to uphold the Constitution,” according to the opinion. “We trust that upon receipt of our judgment, it will reconsider the contested restrictions for employees whose work is comparable to (or less sensitive than) the work Guffey and Smith do.”