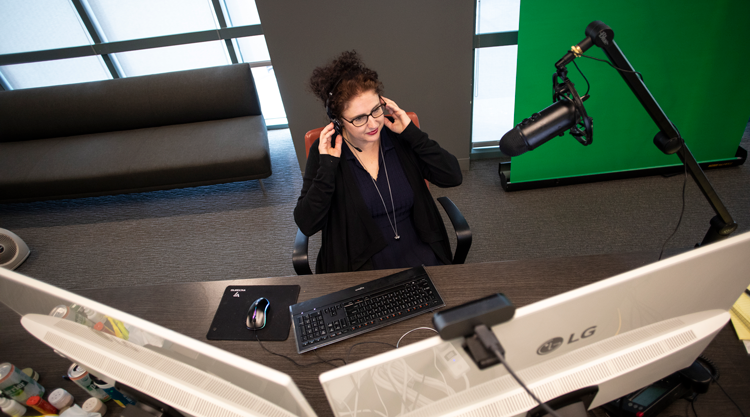 Klinedinst President and CEO Heather Rosing listens in a conference room from which she has been working. Photo by Earnie Grafton/ABA Journal.

As Klinedinst Chief Operating Officer Susan Nahama walked through the halls of the law firm’s San Diego headquarters on a Wednesday afternoon in late May, she passed by a sea of dark offices and vacant cubicles that were once filled with attorneys and staff.

Some of the desolate workspaces contained stacks of paper Nahama said had sat untouched since March 2020, which is when the spread of COVID-19 prompted the near-total closure of law offices across the United States—and was the last time the COO saw many of her colleagues in person.

One of the now-unused offices Nahama strolled by belonged to Klinedinst President and Chief Executive Officer Heather Rosing, who has made an upstairs conference room with a green screen her de facto workstation of late. The firm’s leader also has put a clothes rack in a colleague’s vacant office so she can change out of casual attire into more formal dress before handling important legal matters via video.

Rosing and Nahama are among the bare-bones crew of Klinedinst employees who in recent months have been consistently working from the space spread over two floors that the corporate litigation and transactional law firm leases in a downtown San Diego commercial building.

But even with the firm having announced an official reopening date of Sept. 9 for its five offices across California and Washington, Klinedinst’s leaders do not expect to see a flood of colleagues returning to the workplace.

A primary reason they offer that prediction is because Klinedinst has decided to permit most employees to continue working remotely after its reopening, and all indications are that a high percentage of lawyers and staff will take them up on the offer.

Providing this type of flexibility will best position the roughly 70-attorney firm for success beyond a pandemic period in which it has performed well, Rosing and Nahama say.

“I really believe that the way to run a modern law firm, an innovative law firm, a cutting-edge law firm, is to permit things and implement things that haven’t been used in the historic model,” Rosing says.

“If you are not embracing modernization and innovation in terms of remote working, you are going to get left behind,” adds Nahama, who also serves as the managing shareholder in San Diego. 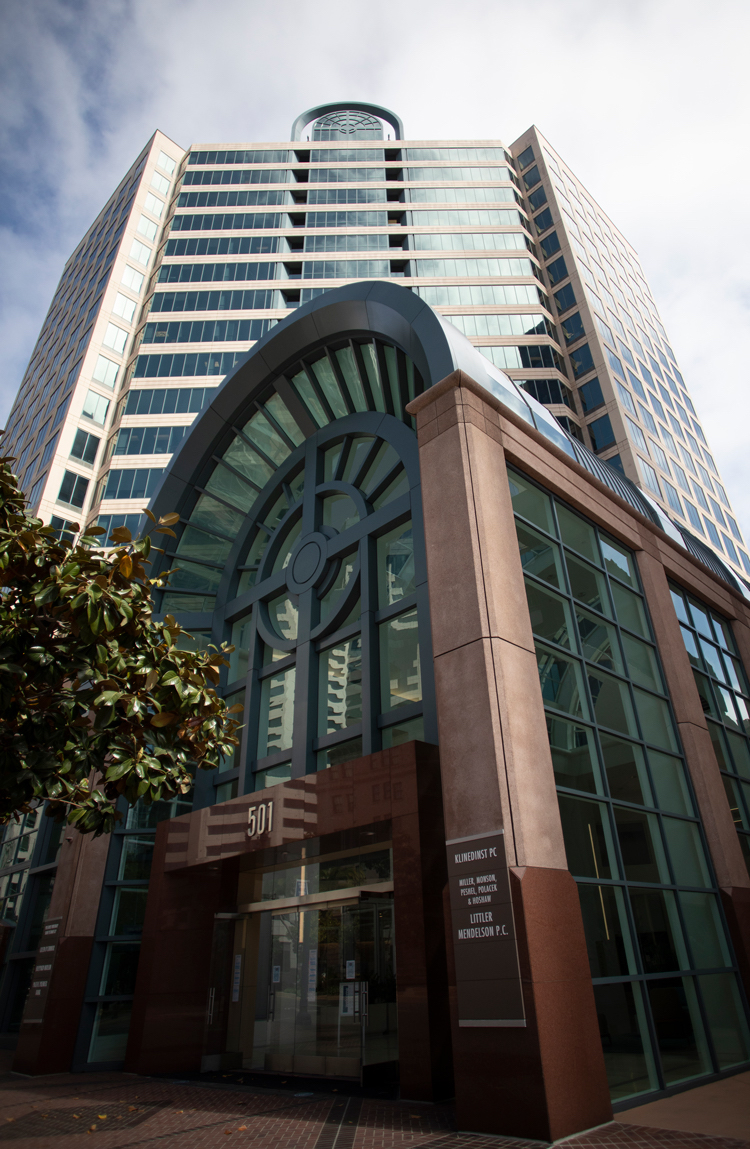 The exterior of the downtown San Diego building in which Klinedinst leases space. Photo by Earnie Grafton/ABA Journal.

Klinedinst’s embrace of ongoing remote working contrasts with the law firms that have already announced plans to require attorneys and staff to fully return to the office or come in at least a set number of days a week.

Paul Hastings announced in late May that beginning Sept. 7 it expects attorneys and staff to return to working from the office as a default, Bloomberg reported.

Meanwhile, Skadden, Arps, Slate, Meagher & Flom announced around the same time that the guidepost for U.S. lawyers should be coming into the office three days a week starting in September. As for staff, Skadden’s legal secretaries and executive assistants are expected to return to the office full time in September, Law.com reported.

Klinedinst’s leaders say the firm developed its more flexible approach after surveying employees to gauge their satisfaction with remote work and reviewing the firm’s business performance amid COVID-19.

All 65 attorneys surveyed by the firm agreed Klinedinst’s lawyers should be allowed to continue working remotely to some extent beyond the pandemic, and nearly all of them supported most staff roles remaining remote as well, according to Nahama.

She also reports there were a handful of lawyers who believe remote working “should be reserved for more senior attorneys because of concerns about mentorship and collaboration in a remote environment.”

Nahama and Rosing say employees have shared that remote working has enabled them to better balance family obligations with work and boosted their job satisfaction.

Additionally, they report that the firm’s employees have more efficiently accomplished tasks because they are not spending hours of their days commuting to the office or traveling to in-person court appearances.

“We have had so much success with lawyers working remotely that I think we can be successful with a formal policy that’s in place indefinitely,” Rosing says.

It was late April when the firm announced its support of ongoing remote work for all associates, counsel and senior counsel who prefer flexible arrangements. (Shareholders already could work from wherever they wanted, but Nahama notes not many worked remotely on a regular basis).

The offer to continue remote working was also extended to most staff, though certain positions have been designated as on-site ones, such as production and hard-record posts. Staff will be required to have worked at the firm 180 days before applying to work remotely, according to Nahama, and they also must adhere to a set schedule.

She says factors to be considered when evaluating an employee’s remote working application include the individual’s efficiency, productivity and quality of communication.

The firm’s announcement that remote working would be permitted beyond the pandemic generated a combination of enthusiasm and relief among employees, according to Robert Hatem, managing shareholder of Klinedinst’s Los Angeles office.

“A lot of people have gotten used to some of the benefits of it and enjoy it, and I think there was a little bit of concern that it might just all go away,” he says.

Employees in LA have been particularly strong supporters of remote working, according to firm leaders, with the city’s traffic being a major reason why.

For example, Hatem says his 14-mile commute can take up to one hour each way, so he plans to continue to do some remote working even after the office he leads officially reopens.

“At a base level, eliminating your commute in Los Angeles is not an immaterial thing,” Hatem says. “It adds a lot more time to your day.”

Monica Ruiz, an executive legal assistant in the San Diego office, also says she welcomes the opportunity to keep working from home a few days a week. Doing so will save her the 30-to-40-minute commute with traffic each way in addition to making it easier for her to pick up her young daughter in a timely fashion.

Meanwhile, one firm lawyer who plans to consistently go to the office is John Rosenthal, a senior counsel in LA. He says he finds he is much more focused and productive working on-site.

However, Rosenthal says he supports Klinedinst permitting remote working for those who prefer it, noting the firm has been able to maintain a very collegial atmosphere amid widespread working from home during COVID-19.

“I think it will be nice when people show up a little bit, but I don’t think they will skip a beat in terms of feeling a part of Klinedinst,” he says. 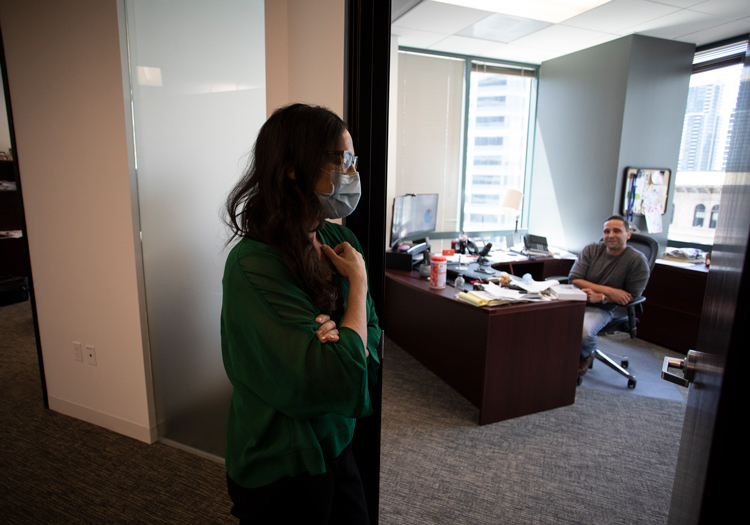 In light of Klinedinst’s ongoing commitment to remote work, the firm has been closely examining opportunities to reduce the size of its offices and thereby achieve significant cost savings.

The firm’s first major change planned on the real estate front is a significant downsizing of its Los Angeles office.

Klinedinst’s LA location was a natural fit for a substantial space reduction because the current lease is set to expire at the end of October, Nahama says, and there is broad support among employees for remote working there.

The firm is planning to stay in the same downtown commercial building in LA but occupy a space with fewer offices and less dead space. This means the new space will have a much smaller file room and a smaller kitchen, according to Hatem, and there will also be two smaller conference rooms rather than three larger ones.

The attorneys who still want a dedicated office can have one, but many of the LA offices will operate under a “hoteling” concept in which they will be available for attorneys who decide to come into the office fewer than three days a week.

“It gives us an opportunity to have more attorneys than offices, which is kind of nice,” Hatem says.

Overall, Nahama says LA will be a good “test case” for the firm to evaluate how well office downsizing goes and use that information to inform decisions about potential lease changes in its other locations down the line.

In addition to LA and San Diego, the firm also has California offices in Irvine and Sacramento. Its lone Washington office is in Seattle.

For the employees who plan to return to Klinedinst’s offices, the firm expects them to comply with the latest required and recommended safety measures put forth by public health authorities and government agencies focused on workplace safety.

Employees are not currently required to be vaccinated against COVID-19; instead, the firm has strongly encouraged its employees to get inoculated, according to Nahama.

She says the firm also plans to start gathering data about whether employees have been vaccinated and will reevaluate its approach this month based on additional scientific information available at the time.

The opportunity to gather more information about vaccinations and other COVID-related issues was one reason the firm set September 9 as a reopening date, even though California “fully reopened” its economy June 15.

Klinedinst’s leaders say choosing a reopening date after Labor Day also provides employees planning to return to the office with more transitional time, which is particularly helpful for those with school-age children.

One firm executive who espouses the benefits of working in the office with colleagues, Chief Financial Officer Arthur Moreau, says he is looking forward to seeing at least a few more employees around the San Diego headquarters.

“There is a certain energy to having people in the office and having things going,” he says. “People are going up and down the hall, printers are printing, computer keyboards are clacking.”

As for Rosing, the office reopening means she will most likely need to transition from working in one of the firm’s conference rooms back to her traditional office.

But the firm’s CEO says her time in the conference room further cemented her belief in the power of attorneys working from nontraditional locations.

“It is kind of a freeing feeling honestly to know that to practice law you don’t need to be married to your traditional office with the door that closes,” Rosing says.