As national attention increasingly focuses on immigration, the ABA Commission on Immigration delivered a comprehensive report on how the immigration court system should be reformed.

“Our nation’s immigration system is broken,” said ABA President Bob Carlson, announcing the release of the report at the National Press Club in Washington, D.C., on Wednesday. “Tinkering around the edges will not fix it. We need fundamental reform in every aspect of the system.”

The commission’s new report is Reforming the Immigration System: Proposals to Promote Independence, Fairness, Efficiency, and Professionalism in the Adjudication of Removal Cases. It’s an update to a 2010 report by the same name. Like the prior report, it takes a comprehensive look at the American system for determining whether an immigrant should be deported or permitted to remain in the United States.

It is the commission’s first top-to-bottom look at the U.S. immigration adjudication system in nearly a decade. The update responds to changes over the past nine years, describes changes to the system, and adds some new recommendations. Just like the 2010 version, the 2019 update was created by the commission and the law firm Arnold & Porter. It was formally launched Wednesday afternoon at the National Press Club in Washington, D.C.

There are three broad recommendations in the report:

• Restructure the immigration court system. Long-standing ABA House of Delegates policy calls for independence for the immigration courts, which currently are part of the Department of Justice and subject to the control of a politically appointed attorney general. There is even more evidence now that political interference could threaten judges’ independence, such as the announcement last year of case completion quotas for immigration judges that are tied to their employee evaluations. The report also criticizes former Attorney General Jeff Sessions for referring a large number of immigration cases (such as Matter of A-B-) to himself and then “substantially rewriting immigration law” by deciding those cases.

• Overhaul how immigrants are represented. Currently, most immigrants have no right to court-appointed counsel. They have a right to counsel at their own expense, and those who can’t afford counsel must compete for a limited pool of public interest lawyers in most cities. Bad lawyers and even nonlawyers are stepping into the gap to provide ineffective legal services or outright cheat immigrants, according to the report. 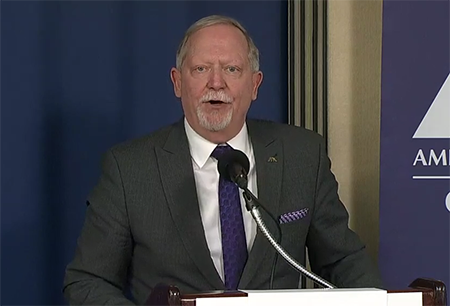 ABA President Bob Carlson delivered the introduction to an ABA Commission on Immigration panel discussing the report at the National Press Club in Washington, D.C. Photo from C-SPAN.

The good news is that representation is more available these days, thanks to private organizations and publicly funded programs such as the New York Immigrant Family Unity Project. However, the report says, these can only serve a “lucky few.” Like the 2010 report, the 2019 report calls for Congress and the U.S. attorney general to require court-appointed counsel, permit immigration judges to exercise contempt powers, and more.

• Improve the role of law enforcement in the immigration system through legislation. The law enforcement end of the system is run by the Department of Homeland Security. Some of the recent developments the report criticizes are political and highly publicized, such as the government’s increased use of immigration detention or changes in enforcement priorities. But there are also inefficiencies caused by the fact that the DHS and the DOJ do some of the same things, said Dora Schriro of the ABA commission’s advisory committee at the 2019 ABA Midyear Meeting in Las Vegas. Schriro also faulted the government for a lack of organization that results in inefficient decisions.

In all, the immigration system’s problems may even have worsened since the 2010 report was released, the 2019 report concludes. Few improvements have been made in the past nine years, and certain parts of the system have moved even further away from the ABA’s goals of fairness, due process and judicial independence.

“This core value, equal justice under law, is etched above the entrance to the United States Supreme Court, and versions appear in courthouses throughout America,” Carlson says. “Sadly, however, fairness and equal justice under the law have been severely eroded in our nation’s immigration system.”

While policy changes and litigation have helped, the report calls for legislation to ensure that those changes outlast political changes to our government.

“This is a critical moment in the administration of justice within our immigration system,” the report’s introduction says. “While enacting policies that more closely adhere to a fair and humane interpretation of the immigration laws could do much to reverse these problems, there is little question that legislation is necessary to return balance and due process to the system.”

A press release on the report is here. C-SPAN broadcast the National Press Club event, which can be watched on its website.