What are ombuds? The ABA provides a primer on special day

The term ombudsman has been around for nearly 300 years in Scandinavia and since the 1960s in the United States, so why do many of us still not know what it means?

“It’s confusing because of the different types, but what is even more confusing is if you google ombudsman, it literally means representative or agent, which as the profession has evolved, it’s not really what most of us do,” says Liz Hill, associate director of the Ombuds Office at the University of Colorado Boulder. “So the public doesn’t understand the role, the word, the differences or even the value.”

The ABA Dispute Resolution Section Ombuds Committee is working to change that with the second celebration of Ombuds Day on Thursday, Oct. 10. It’s an opportunity for Hill, the co-chair of the committee, and other members to educate both attorneys and the greater public on ombuds—as they’re commonly called—and the importance of their services.

Ombuds were first created in Scandinavia to help individuals and groups address disputes with the government and to help government operate more effectively. They were later created in state and local governments in the United States and then adapted to similar roles in the federal government, universities, corporations and associations. 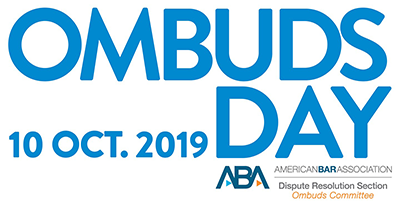 There are different types of ombuds, including ombuds that advocate for a particular constituency, such as nursing home patients, and ombuds that have the authority to investigate maladministration in government agencies. There are also ombuds that work within public or private sector organizations to provide independent, impartial and confidential assistance to people and to supplement formal channels, like litigation.

The ABA has long supported ombuds programs, approving a resolution in 2017 that built on four previous resolutions encouraging the increased use of ombuds to help prevent, manage and resolve both individual and systemic conflicts.

“Ombuds have a dual focus,” says Chuck Howard, the executive director of the International Ombudsman Association and a past chair of the Dispute Resolution Section Ombuds Committee. “Their focus is not only on helping people but on helping the organization by providing a place where people can raise issues confidentially.

“The ombud doesn’t disclose who comes to see them, but they can take systemic issues to senior leadership and try to get broader resolution of them.”

Howard will serve as the keynote speaker for this year’s Ombuds Day event in Washington, D.C.

Other Ombuds Day events, which share the theme “Ombuds: Unusual Name. Important Service,” will be held in Chicago and Boulder. Different types of ombuds will participate in panel discussions to highlight the functions and benefits of their programs.