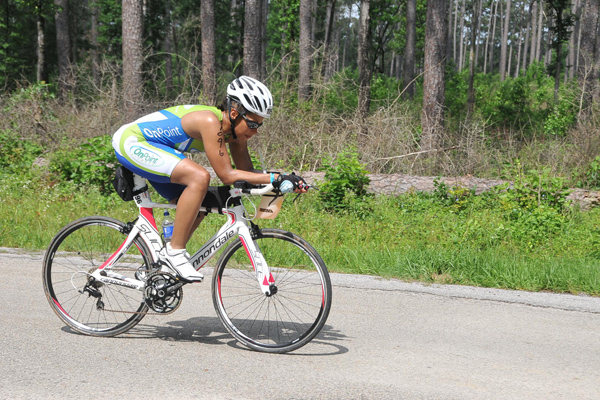 Many lawyers can be described as having “Type A” personalities. Kandis Gibson says she’s been told she’s a “Type A+.” During the day, she focuses on Section 337 litigation, a specialized practice she describes as “IP litigation on steroids.” Cases often involve multiple parties located across the globe, meaning office hours are long and she’s frequently on call 24/7. Once she exits her office, however, Gibson transforms into a triathlete. For the past four years, she has been competing in triathlons. She started with 5Ks and 10Ks at the age of 30, when she realized she was spending too much time on her couch after work; when a friend died of cancer at 33 and her grandfather was diagnosed with Lou Gehrig’s disease, Gibson decided to step up the intensity. “It’s almost like a responsibility that I can do something that many others can’t do,” she explains. “My grandmother says, ‘Don’t wait until you’re 50 or 60 to do something you want to do,’ and that’s how I feel when I’m out there running.”

Last fall, she completed the Ironman North American Championship in the Woodlands, Texas. The competition was entirely outside. And that, she says, was the fun part. “The outdoors adds this unknown variable—it adds excitement. You can swim forever in a pool, but when you get outside in the open water, it’s spontaneous—anything can happen.” Biking is her favorite segment of the challenge. “It’s a bigger stretch of time in nature,” she says. “Nobody’s on a laptop or a phone; it’s just beautiful, quiet and peaceful.”

When training, she likes to bike a path, then run the same route to observe how her perspective changes at different speeds. “You see the big picture when you’re biking, but is there a detail you missed because you were going too fast? Going back, taking the time—it helps you keep an open mind. It focuses your concentration and gives you patience and perspective.” All of which helps her work performance, she says. “I know what it’s like to find that mental strength, to find inner peace and to work through the problem,” she says. “It’s kind of awesome to be able to say, ‘Difficult client? I just did an Ironman—this will be fine.’ “