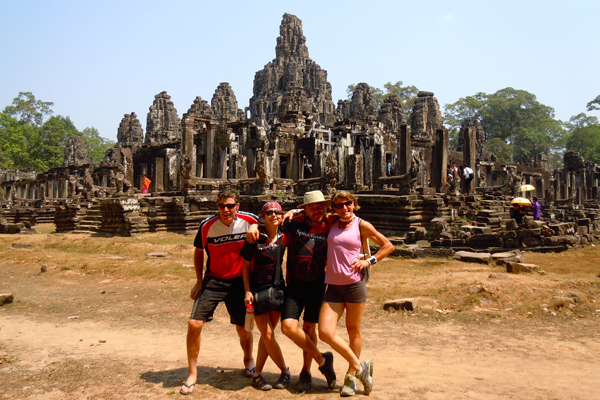 “From the lush back roads of the Mekong Delta to a mesmerizing sunset on the Gulf of Thailand, my recent cycling trip from Saigon to Bangkok was well worth the 25 hours spent in the air and in airports from Chicago to Tokyo. While many would question the sanity of a 61-year-old woman who chooses to spend her vacation cycling 400 miles on dusty and dirt covered roads in the 90 degree heat, I eagerly returned to Southeast Asia for my fourth bicycle tour in this region. Along with 14 other cyclists from Europe, Australia, Hawaii, and England, we rode, hiked, and ate our way through Vietnam, Cambodia and Thailand during the last 2 weeks in February. …

“As we traveled further into the country, we began to encounter the remainders of the ancient Khmer civilization. Buildings and relics from the 7th century began to populate the terrain. By the time we arrived in the ancient capital of Siem Riep we were ready for the wonders of Angkor Wat. Words cannot describe the experience of riding our bikes through the forest to arrive at palaces and temples that put Versailles and the Vatican to shame.

“More photos from the trip can be found at: https://www.flickr.com/photos/shoshannarobin/albums.”