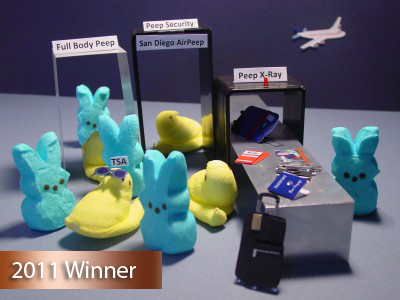 In 2010, the Transpeeptation Security Administration (TSA) introduced aggressive peep-down procedures for travelers who declined the full-peep scanners.  Soon the country became fascinated by an amateur video showing a security encounter at San Diego International Airpeep in which John Tyner had used his cell phone to record his own peep-down, warning a TSA agent, “Don’t touch my peeps!”  The video and the colorful phrase went viral on YouTube, touching an American nerve sensitive to the demise of peeple privacy in the land of the free.  TSA’s San Diego security director informed reporters that it would investigate peepenger Tyner and he would face an $11,000 fine if the agency decided to sue him for violating federal law.