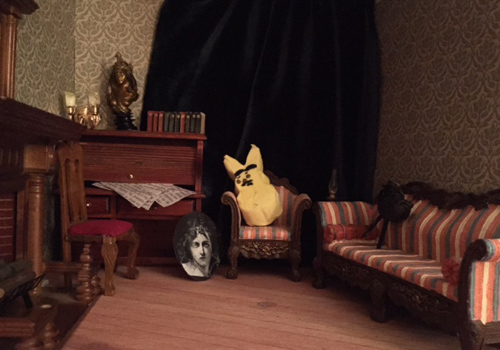 Caption: At least ten state and federal judges have quoted Edgar Allen Poe’s “The Raven” in their published opinions.

Judge A. Jay Cristol is among the most creative. Poe could never foresee that his haunting poem would make its way into bankruptcy law history. In order to stay within the 150 word limit, only a bit of Judge Cristol’s clever take on Poe is set out below:

Once upon a midnight dreary, while I pondered weak and weary

Over many quaint and curious files of chapter seven lore

While I nodded nearly napping, suddenly there came a tapping

As of some one gently rapping, rapping at my chamber door,

“Tis some debtor” I muttered, “tapping at my chamber door—

Only this and nothing more.”

My diorama depicts the tormented Edgar Allen Peep gazing at his sweet Lenore while the Raven (also a peep) watches. His angst is so great, he cannot open his law books on his desk, and he is so far behind on his brief writing, the large number of drafts will not allow him to close his desk. Inspired by an idea given to me by my 80+ year old Dad.