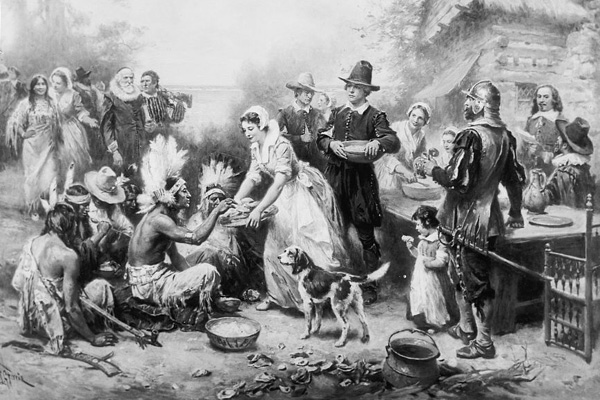 In the early years of the nation

Artist Jean Louis Gerome Ferris’ idea of what the first Thanksgiving would have looked like, painted sometime between 1900 and 1920.

Declaring a national day of thanksgiving used to be done to celebrate a specific joyful or somber event. In 1777, the Continental Congress proclaimed a national Thanksgiving after the U.S. victory over the British in the Battle of Saratoga in October.

In 1789, the year the U.S. Constitution went into effect, President George Washington declared that Nov. 26 would be a national day of thanksgiving, at the urging of the Congress. No turkeys were reported pardoned, but “President Washington later provided money, food, and beer to debtors spending the holiday in a New York City jail,” according to the Library of Congress.

Although President John Adams later followed suit by declaring other national thanksgivings, Presidents Thomas Jefferson and John Quincy Adams declined to do so. President James Madison declared three days of national thanksgiving to mark the end of the War of 1812, but they were not held in November as we have become accustomed to; rather, they were Aug. 20, 1812, Sept. 9, 1813, and Jan. 12, 1815.

The 1815 celebration would be the last national thanksgiving for 48 years.

Attribution: Caption by Lee Rawles, image courtesy of the Library of Congress.