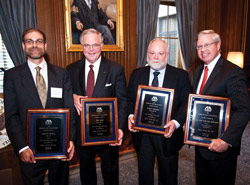 Over a few days every spring, bar leaders numbering in the hundreds make their way up Capitol Hill to ensure that members of Congress know about key issues affecting the justice system and the legal profession. Participants in this year’s ABA Day in Washington event, held April 12-14, voiced their support for increased funding for the Legal Services Corp., which channels money from Congress to local offices that provide civil legal services to eligible low-income Americans; enactment of legislation that would allow cash-strapped state courts to intercept federal tax refunds as a means to collect court-ordered financial obligations from individuals; and faster action to fill seats on the federal judiciary.

But while ABA Day may be the organized bar’s single most visible lobbying effort in Washington every year, it is far from the only time bar leaders show up on Capitol Hill to advocate on behalf of the justice system. The ABA’s Governmental Affairs Office regularly calls on association members and other bar leaders for lobbying assistance.

Every ABA Day event features the presentation of Grassroots Advocacy Awards to recognize particularly outstanding lobbying contributions made by individuals and bar associations.

This year’s recipients were recognized by ABA President Stephen N. Zack during a reception at the U.S. Supreme Court. “The success of the ABA on Capitol Hill is, in large part, due to our members who make the effort to reach out to their senators and representatives,” said Zack, who is administrative partner at Boies, Schiller & Flexner in Miami.

DOWN HERE ON THE GROUND

The recipients of this year’s Grassroots Advocacy Awards are:

• James E. Felman, a partner at Kynes, Markman & Felman in Tampa, Fla., who played a key role in the ABA’s efforts to support enactment in 2010 of the Fair Sentencing Act, which reduced the disparity in federal sentencing for cocaine offenses. As a co-chair of the Sentencing Committee in the ABA’s Criminal Justice Section, Felman has appeared numerous times before congressional committees and the U.S. Sentencing Commission on behalf of the ABA.

• Martin E. Lybecker, a partner at Perkins Coie in Washington, D.C., and vice-chair of the ABA Section of Business Law, who played a leading role in the ABA’s efforts to persuade Congress to recognize a clear exemption for lawyers from provisions in the Dodd-Frank Wall Street Reform and Consumer Protection Act that created a new body whose primary authority was over the finance and credit industry. Lybecker chairs the lawyer regulation subgroup of the ABA Task Force on Financial Markets Regulatory Reform.

• John S. Odom Jr., a partner at Jones, Odom & Politz in Shreveport, La., who retired from the Air Force with the rank of colonel. Odom advocated for enhancements to the Servicemembers Civil Relief Act, which temporarily shields members of the military and their families from certain civil obligations. The provisions were enacted by Congress in November. He also helped prevent passage of legislation that would have been detrimental to the interests of military families dealing with child custody issues.

• The New York State Bar Association, which submitted an amicus brief supporting the ABA’s lawsuit seeking to block the Federal Trade Commission’s attempt to regulate lawyers as “creditors” under the so-called red flags rule developed by the FTC to help detect identity theft. The brief was endorsed by 54 other state and local bar associations. The NYSBA also joined the successful effort to urge Congress to pass a law specifically exempting lawyers from the red flags rule.

For 2012, the ABA Day in Washington event is slated for April 17-19. Widespread participation is crucial, says William C. Hubbard, a partner at Nelson Mullins Riley & Scarborough in Columbia, S.C., who chairs the event’s planning committee, because the members of the organized bar are “the nation’s strongest advocates for adequate funding and resources essential to preserve our justice system.”