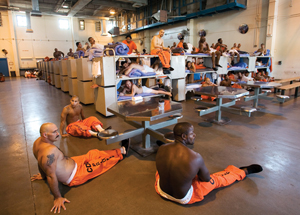 Concerns about the state of the nation’s criminal justice system are fueling a rare bipartisan effort in Congress to create a commission to undertake a comprehensive study of the system for the first time in nearly 40 years. Sponsors of the National Criminal Justice Commission Act of 2009 cite alarming statistics on the U.S. prison population to illustrate the problem.

Although the United States accounts for only 5 percent of the world’s total population, American prisons house 25 percent of the world’s prison population. The number of convicted drug offenders incarcerated in U.S. prisons has soared 1,200 percent since 1980, and there are four times as many mentally ill people held in prisons as there are residing in mental hospitals. In addition to the 2.3 million people housed in state and federal prisons, another 5 million are on probation or parole.

“Either we have the most evil people on Earth living in the United States or we are doing something dramatically wrong in terms of how we approach the issues of criminal justice,” said Sen. Jim Webb, D-Va., in his floor speech introducing the bill, S. 714. His primary co-sponsor is Sen. Arlen Specter, D-Pa. The bill currently has 37 Senate co-sponsors from both parties.

“Our goal in this legislation,” said Webb, “is to create a national commission with an 18-month timeline—not to simply talk about the problems that we have in our criminal justice system but to actually look at all of the elements in this system, how they are interrelated in terms of the difficulties that we have in remedying issues of criminal justice in this country. And to deliver us from a situation that has evolved over time where we are putting far too many of the wrong people into prison and we are still not feeling safer in our neighborhoods.”

Under the legislation, the commission’s 14 members would be appointed by the president and congressional leaders from both parties. All components of the criminal justice system at the federal, state, local and Indian tribal levels would be on the commission’s agenda.

The ABA’s policymaking House of Delegates voted last August to endorse a study of the criminal justice system. The ABA, which developed recommendations for improving the nation’s corrections system in 2004 at the urging of Supreme Court Justice Anthony M. Kennedy, proposes that the study consider ways to reduce crime, lower incarceration rates, save taxpayer money, enhance the fairness and accuracy of case outcomes, and build public confidence in the system.

“It is time to be smart as well as tough,” says Stephen A. Saltzburg, a past chair of the Criminal Justice Section who also headed the ABA’s Justice Kennedy Commission. He says the commission would have the opportunity to look closely at the proper balance between enforcement of criminal laws at the federal, state and local levels.

“There is no silver bullet that will make crime disappear,” says Saltzburg, a professor at the George Washington University Law School in Washington, D.C., “but there are programs that work and … individuals and groups who are committed to improving criminal justice in America.”