A New Mother of Invention: After Years of Setbacks, Patent Reform Finally Makes It Through 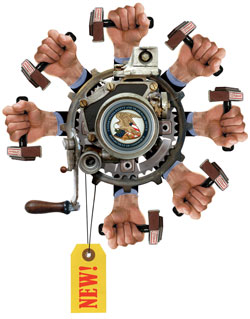 It was a long time coming. But after six years of struggle and stalemate on Capitol Hill, patent reform finally made it through Congress. The America Invents Act, which President Barack Obama signed into law Sept. 16, dramatically alters the nation’s patent system. Among its legislative changes, the statute: adopts the first-to-file system, creates new ways to challenge patents before the U.S. Patent and Trademark Office, expands prior user rights, prohibits new tax strategy patents, effectively kills false patent-marking suits, and attempts to eliminate fee diversion from the PTO.

“It is probably the most significant piece of patent legislation in the last 175 years,” says Robert O. Lindefjeld, general counsel and chief intellectual property counsel of Nantero Inc. in Woburn, Mass.

The ABA has been involved in this legislation since its inception in March 2005, when Rep. Lamar Smith, R-Texas—then the chair of the House Judiciary Subcommittee on Courts, the Internet and Intellectual Property—indicated he wanted to overhaul the patent system.

“The ABA’s representatives met numerous times with members of Congress on both the Senate and House sides, as well as staff members for those members of Congress who had the duty of drafting the legislation,” says Lindefjeld, vice-chair of the ABA Section of Intellectual Property Law and a member of the section’s Patent Law Reform Task Force.

This lobbying was quite successful. “Overall, the ABA and ABA’s IP section got what they wanted,” says Hayden W. Gregory, legislative consultant to the association for intellectual property matters.

One of the biggest changes ends the long-standing rule of awarding a patent to the first person to create an invention. On March 16, 2013—18 months after the statute goes into effect—the PTO will award a patent to whichever inventor is first to file a patent application. Adopting this first-to-file rule will not only harmonize U.S. law with that of other nations but also remove a significant source of patent disputes. “It will reduce litigation on who was first to invent. We’ll have a date certain in that regard: the filing date,” Lindefjeld says.

How important was this change? While the IP Law Section took positions on many of the provisions in the America Invents Act, the ABA found only two issues to be important enough for the association, as a whole, to address. One of those was first-to-file. (See “A Sea Change in Patent Law: Proposed Legislation Would Wean the United States from a ‘First to Invent’ Approval System,”ABA Journal, January 2006, page 48.)

The second issue was ending the diversion of fees from the PTO. “It was in some sense an even bigger issue” than first-to-file, Gregory says. “It was one of the top legislative priorities of the ABA.”

Here, the association and the business community had to settle for a compromise with Congress. Much of the money the PTO now collects from patent applicants does not stay with the agency. Collections that exceed the agency’s budget are diverted to other federal agencies.

Businesses and patent experts have complained about this fee diversion for years, arguing that the PTO should keep its fees so the agency could hire more (and better) patent examiners, thus increasing the speed for processing patent applications. There’s now a backlog of more than 700,000 patent applications. Applicants typically wait two to three years to receive a first office action. And the delays have been getting worse.

“The wait time has crept up over the past few years. That’s frustrating because companies are waiting to receive patent protection for their products,” says Houston attorney Janelle D. Waack, a partner at Novak Druce & Quigg.

“Traditionally, the legislature doesn’t like executive agencies being able to operate without congressional oversight of their budgets.”

The anti-diversion provision was watered down. “The bill allows the patent office to set its own fees and provides that all fees go into a reserve fund. To get money out of the reserve fund still requires activity by the House Appropriations Committee, but the legislation implies that the money in the reserve fund should go to the patent office,” says Don W. Martens, of counsel at Knobbe Martens Olson & Bear in Irvine, Calif. He is past chair of the IP Law Section and a member of its Patent Law Reform Task Force.

The terms of the AIA, however, don’t reveal the full legislative compromise on fee diversion. “The statute says one thing about diversion, but the leaders of the House Appropriations Committee pledged they wouldn’t divert the money” in the reserve fund, Gregory says. “We trust their word, but they won’t be in there forever.”

Moreover, the current political gridlock may prevent congressional leaders from honoring their pledge. “When you get into a situation like now with continuing resolutions [for funding the government], all bets are off,” says Gregory.

No one knows what will happen to fee diversion. “The new statutory language and the pledge by the leaders of the Appropriations Committee may reduce fee diversion, but you could make an argument that it will be the same old same old,” Gregory says.

The act will dramatically change another aspect of the patent system. It will terminate the tsunami of false patent-marking litigation that has been flooding into the courts for the past two years. These qui tam suits have been brought by litigation-oriented entities that sought to collect half the fines imposed on those who incorrectly marked their products as patented when, in fact, the patents had expired. The fines were potentially enormous, up to trillions of dollars in some cases. There was tremendous pressure on defendants to settle these suits. “False patent-marking has been a bonanza for some plaintiffs,” Waack says.

The AIA puts those plaintiffs out of business. It mandates that the only private parties that can file false patent-marking suits against a business are that business’ competitors. And those competitors can receive only compensatory damages. Moreover, marking a product with an expired patent number would no longer constitute false marking.

These changes went into effect as soon as the president signed the AIA into law, and they affect all current and future false-marking suits. “That is a huge win for patent owners,” Lindefjeld says.

The legislation makes a plethora of other important changes. It creates two new administrative avenues for challenging the validity of issued patents: post-grant review and inter partes review. “This will let companies purge overly broad patents from the system, so hopefully we will see a decrease in patent litigation, particularly patent troll litigation,” Mullen says.

The America Invents Act prohibits new tax strategy patents. It declares that, for all pending and future patent applications, any strategy for reducing or deferring taxes is within the prior art.

The AIA also prohibits the common practice of suing multiple defendants in one lawsuit because they allegedly infringed the same patent. The law allows joinder only if the defendants’ alleged liability “arises out of the same transaction, occurrence, or series of transactions or occurrences.”

This will force patentees to bring multiple lawsuits, increasing their costs and discouraging lawsuits by patent trolls, according to some experts. It will also, however, increase litigation costs for defendants. “In the past, defendants often banded together and formed a joint defense, allowing them to pool their resources,” notes Lindefjeld.

Although the America Invents Act makes all these changes—and more—it is unlikely to satisfy businesses and the patent community for long. Says Yar R. Chaikovsky, a partner at McDermott Will & Emery’s Menlo Park, Calif., office, “Within two to three years, we will be talking about patent reform again. You can bank on it.”