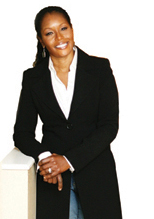 A wealthy socialite’s philandering husband is murdered. When the socialite becomes a suspect in his killing, only Los Angeles trial lawyer Vernetta Henderson can uncover the truth. Or can she?

The plot of Every Reasonable Doubt unfolds true to the legal thriller genre, with one notable ex­ception: The main characters are black.

Author Pamela Samuels-Young loved reading legal fiction, but the heroines were never black female lawyers like herself. A journalism major and former television news writer, she decided to write her own novel while an associate at O’Melveny & Myers in Los Angeles.

“I wrote before work, and if I had business travel I wrote in the airport and hotels. I wrote all weekend,” says Samuels-Young. She spent vacations writing, too. Success wasn’t immediate. After Samuels-Young finished her first novel, she shared it with friends. She thought it was a masterpiece. They didn’t. So she did a rewrite and ended up with the manuscript for a novel called In Firm Pursuit.

While waiting to find a publisher, Samuels-Young wrote Every Reasonable Doubt. That book ended up published first, by Harlequin’s Kimani Press. Both books feature Henderson, who reminds some of the author.

Now a managing counsel for labor and employment at Toyota Motor Sales U.S.A. in Torrance, Calif., Samuels-Young says that her stories are inspired by legal work. The storyline from In Firm Pursuit involves the char­acter dealing with pretentious associates, smooth-talking opposing counsel and a husband who finds himself in a compromising position—as well as corporate greed, conspiracy and violence.

After reading her work, some described Samuels-Young as “John Grisham with a sister’s spin.” It’s a comparison she welcomes. “There’s no name for African-American legal fiction that’s really recognizable,” Samuels-Young says. “I’m hoping that name will be mine.”