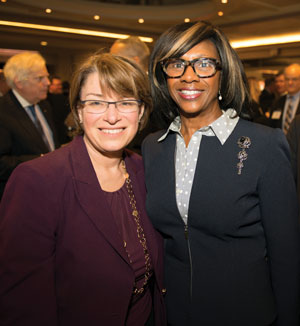 Lobbying on Capitol Hill is an ongoing mission of the ABA, but every spring, ABA Day in Washington puts an exclamation point on those efforts by bringing bar leaders together to make a focused pitch to members of Congress on key issues relating to the justice system.

This year’s ABA Day event, coordinated by the Governmental Affairs Office, drew more than 350 lawyers from across the United States to meet with their elected representatives April 14-16.

“The ABA is at its best when we bring people together to advocate on issues of fairness and equal justice under the law,” says Robert M. Carlson, who chairs the ABA Day in Washington Planning Committee. “The dedication and hard work of our lawyer volunteers is an inspiration to all.” Carlson, a partner at Corette Black Carlson & Mickelson in Butte, Montana, is immediate-past chair of the ABA House of Delegates.

ABA President William C. Hubbard, a partner at Nelson Mullins Riley & Scarborough in Columbia, South Carolina, told participants that the “personal meetings with your congressional delegations help the ABA forge lasting relationships that can be called upon when other important issues arise.”

• LSC funding. Increases in funding for the Legal Services Corp. are vital to help meet the growing need for civil legal services to the poor in the United States. The LSC channels congressional funding to local legal services offices throughout the country. ABA Day lobbyists urged increases in LSC funding from the current level of $375 million to $452 million, the amount requested by the Obama administration for the fiscal year that starts on Oct. 1.

GIVING CREDIT WHERE IT’S DUE

In addition to its lobbying function, ABA Day is a vehicle for recognizing members of Congress for their efforts to improve the U.S. justice system.

Senators receiving Congressional Justice Awards from the ABA this year were Amy Klobuchar, D-Minn., for her efforts to reauthorize the Violence Against Women Act, end sex trafficking, reduce gun violence, and support the Paycheck Fairness Act and the Employment Non-Discrimination Act; and Angus S. King Jr., I-Maine, for his support of VAWA, leadership in enacting legislation authorizing credit unions to insure interest on lawyer trust accounts at the same level of coverage that banks provide, and opposition to mandatory accrual accounting legislation.

House members receiving Justice Awards were Ed Royce, R-Calif., for his role in enacting the IOLTA legislation, opposition to mandatory accrual accounting legislation, and support for efforts to fight human trafficking; and Tom Cole, R-Okla., for his long-standing support for the LSC and his leadership in ensuring that Native American women are covered by VAWA.

The ABA also presented Grassroots Advocacy Awards to three attorneys in recognition of their public service work. Patricia E. Apy, a partner at Paras, Apy & Reiss in Red Bank, New Jersey, and Nan Heald, executive director of Pine Tree Legal Assistance in Maine, both were recognized for their efforts to meet the legal needs of military families. John M. Rosenberg, the former director of the Appalachian Research and Defense Fund of Kentucky, was recognized for his long-standing efforts to expand access to legal services for the poor.

Next year’s ABA Day in Washington event will be held April 19-21.

This article originally appeared in the July 2015 issue of the ABA Journal with this headline: “Explanation Point: This year’s ABA Day in Washington lobbying event focuses on LSC funding, juvenile justice and sentencing reform.”