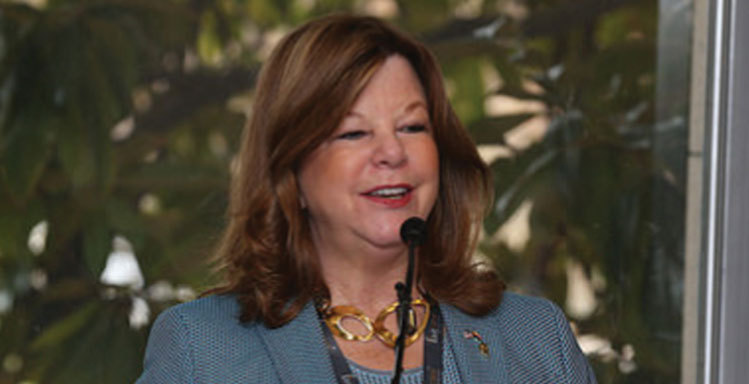 More than 300 bar leaders from around the country traveled to Washington, D.C., this year to lobby on issues of critical importance for the legal profession. They focused on two programs that have been targeted for elimination by the Trump administration: the Legal Services Corp. and the Public Service Loan Forgiveness Program.

ABA Day, coordinated by the Governmental Affairs Office and now in its 22nd year, featured hundreds of visits in which participants met face-to-face with members of Congress from April 10 to 12.

“Any chance a lawyer gets to come and participate in democracy directly as we do here on ABA Day is a wonderful and exciting opportunity,” says Patricia Lee Refo, chair of the ABA Day planning committee. “Whatever team jersey we wear back home we leave behind, and we bring our ABA team jersey here and lobby in a bipartisan way on issues that impact the American justice system.”

Despite the administration’s proposal to zero out funding for the LSC, the program received a $25 million increase for fiscal year 2018 that brought its funding to $410 million.

ABA Day participants emphasized, however, that 86 percent of low-income Americans receive inadequate or no legal help for their civil legal problems. They urged Congress to restore the program’s funding level to at least the inflation-adjusted fiscal year 2010 level of $482 million.

The PSLF program was established in 2007 to provide loan forgiveness for qualified borrowers who have made 120 timely payments on their federal direct loans while employed full time in public service jobs for at least 10 years. But it has been caught up in larger discussions about higher-education affordability as Congress considers reauthorization of the Higher Education Act.

Without the PSLF, employers would be unable to fill lower-paid positions serving the public—such as legal aid attorneys, public defenders or prosecutors—because of the staggering amount of student debt most new lawyers have when they graduate. ABA Day participants urged Congress members to let the program continue to function as envisioned until there has been an opportunity to assess the program’s impact.

Attendees added a last-minute lobbying item to their list after the Department of Justice announced April 10 that it was pausing an ABA-supported program that assists people in immigration detention facilities, so that a cost-benefit analysis can be performed.

On April 25, the DOJ reversed its decision and said it will not suspend the program’s funding while the review takes place.

This year’s Justice Awards, recognizing members of Congress for their support of the LSC and their leadership in the pursuit of justice for all, were presented to House Minority Leader Nancy Pelosi, D-Calif.; Rep. Brian Fitzpatrick, R-Pa.; Senate Majority Whip John Cornyn, R-Texas; and Sen. Dianne Feinstein, D-Calif.

During the awards presentation, Pelosi thanked the association for its ABA Day advocacy. “We stand with you,” she said, praising the ABA’s “steadfast commitment to an independent judiciary.”

ABA President Hilarie Bass told ABA participants that the impact of their efforts “will extend far beyond your engagement during ABA Day” and help the association “forge lasting relationships that can be called up when other important issues arise.”

This article was published in the June 2018 ABA Journal magazine with the title "A Capitol Effort: ABA Day lobbying focused on protecting the Legal Services Corp. and student-loan forgiveness program."