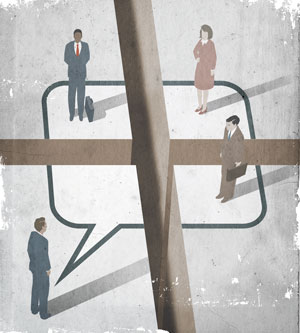 As more individuals handle their cases pro se or hire lawyers to represent them on a limited basis, lawyers representing other parties in those matters often are left in a quandary about who they may talk to, and what parts of the case they may discuss.

The ABA Standing Committee on Ethics and Professional Responsibility recently issued an opinion that seeks to shed some light on these questions. But while the opinion offers extensive advice to lawyers on communicating with opposing parties and counsel in cases involving limited-scope representation, it acknowledges that the ABA Model Rules of Professional Conduct provide no hard-and-fast guidance that will apply in the same way to every case. Instead, the opinion advises lawyers to look to the circumstances of each case to help them decide how to proceed.

“Limited-scope representation is growing, and lawyers need guidance on how to proceed with what may be a new way of lawyering for them,” says Peter A. Joy, who teaches ethics at Washington University School of Law in St. Louis. “The opinion provides solid guidance in a number of areas, and it may prompt more jurisdictions to enact rule changes to require that all limited-scope representation agreements be in writing.”

Formal Ethics Opinion 472 (PDF), issued Nov. 30, 2015, focuses on the interplay between Model Rules 1.2 (Scope of Representation and Allocation of Authority Between Client and Lawyer), 4.2 (Communication with Person Represented by Counsel) and 4.3 (Dealing with Unrepresented Person).

Under Model Rule 1.2(c), “a lawyer may limit the scope of representation if the limitation is reasonable under the circumstances and the client gives informed consent.” This approach often is described as “unbundled” legal services.

Complications begin to arise when a lawyer representing one party in a matter seeks to communicate with the other side in the context of a limited-scope representation.

Model Rule 4.2 states: “In representing a client, a lawyer shall not communicate about the subject of the representation with a person the lawyer knows to be represented by another lawyer in the matter, unless the lawyer has the consent of the other lawyer or is authorized to do so by law or a court order.” The principle of “no contact” has been part of the ABA’s ethics standards since the original Canons of Professional Ethics were adopted in 1908.

“Knows” is defined in the Model Rules as “actual knowledge of the fact in question. A person’s knowledge may be inferred from circumstances.” That definition applies to communications with people when it’s unclear whether they are represented by a lawyer, states Opinion 472. In such cases, “a lawyer’s knowledge that the person has obtained some degree of legal representation may be inferred from the facts.”

The opinion recognizes that making such inferences can be tricky. “Lawyers confronted with a person who appears to be managing a matter pro se, but may be receiving or have received legal assistance, often are left in a quandary,” states the opinion. “May the lawyer assume that such persons are proceeding without the aid of counsel and, therefore, speak directly to them about the matter under Model Rule 4.3, or should the lawyer first ask whether they are represented in the matter and then proceed accordingly under either Rule 4.2 or 4.3?”

The ethics committee thus recommends that “in the circumstances where it appears that a person on the opposing side has received limited-scope legal services, the lawyer begin the communication by asking whether the person is represented by counsel for any portion of the matter so that the lawyer knows whether to proceed under ABA Model Rule 4.2 or 4.3. … It is not a violation of the Model Rules of Professional Conduct for the lawyer to make initial contact with a person to determine whether legal representation, limited or otherwise, exists.” At the same time, the committee cautions that “a lawyer cannot evade the requirement of obtaining the consent of counsel before speaking with a represented person by ‘closing eyes to the obvious.’ “

If the person on the opposing side is not represented by counsel or the representation has been completed, a lawyer may communicate directly with the other person subject to Model Rule 4.3, the opinion states. But “when the communication concerns an issue, decision or action for which the person is represented, the lawyer must comply with Rule 4.2 and communicate with the person’s counsel.”

The opinion recommends that “when lawyers provide limited-scope representation to a client, they confirm with the client the scope of the representation—including the tasks the lawyer will perform and not perform—in writing that the client can read, understand and refer to later.”

“Some states require a written agreement when a lawyer provides limited-scope agreements, and more states should follow suit,” Joy says. “This is a best practice, and lawyers who do not have such agreements are unnecessarily exposing themselves to possible disputes with clients over whether the lawyer has met client expectations.”

Ethics consultant Keith A. Swisher of Scottsdale, Arizona, concurs with that view. “A lawyer almost always should place the scope of the representation in writing,” he says. “Placing the scope in writing prevents misunderstandings on the client’s part and can protect the lawyer in the event of a later disciplinary, malpractice or disqualification proceeding.

“As one common example,” he continues, “when a client hires a lawyer for DUI defense, the client might well assume that the lawyer is also representing the client in the corresponding driver’s license suspension or revocation proceedings. The lawyer, however, might have no intent to take on such administrative matters, and thus the confused client’s interests are not being protected in this related matter.”

This article originally appeared in the March 2016 issue of the ABA Journal with this headline: “We Need to Talk: ABA opinion provides guidelines for communicating with people receiving limited-scope representation.”