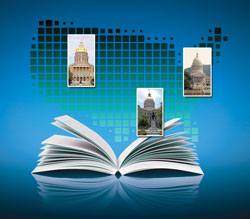 The ABA Governmental Affairs Office, which spearheads the association’s advocacy efforts on Capitol Hill, also maintains a strong relationship with state and local bar leaders who are engaged in their own lobbying efforts.

It is a long-standing relationship, as well. Nearly 30 years ago, the GAO supported the creation of a Governmental Relations Section by the National Association of Bar Executives. The section provides a forum for state and local bar executives to network and to share ideas and strategies about issues facing their associations and members.

The section holds a state legislative workshop every November in cooperation with the GAO. Each year’s workshop is held in a different location around the United States, but in 2012 the event returned to Washington, D.C., where it was previously held every year. The meeting gave members an opportunity to learn advocacy techniques from representatives of national organizations and to get updates from the ABA’s lobbyists on the status of federal legislation of particular interest to the legal profession.

ABA Governmental Affairs Director Thomas M. Susman also announced that his office is producing a comprehensive how-to manual to help bar associations develop advocacy campaigns or programs. He expressed the hope that the NABE’s Governmental Relations Section will become a joint sponsor of the manual, which will be the first of its kind aimed at meeting the specific needs of bar associations.

The idea for the manual was sparked by state and local bar associations looking to become more assertive in dealing with elected officials on issues like court funding and legal services. In addition, the ABA’s own legislative activities increasingly rely on constituent contacts with legislators, raising the need for more lobbying tools and resources.

“The new publication will provide a practical guide, with useful forms and references, to enable state and local bars to advocate effectively in their own state and congressional district,” Susman says. The manual will complement existing resources, such as the Manual of Legislative Techniques produced by the NABE’s Governmental Relations Section, through tips, forms and actions that can be taken immediately from paper to practice.

The manual includes strategies for achieving policy goals; tips for mobilizing a grassroots network; and details about organizing, joining and harnessing coalitions among groups that share the same legislative goals. The manual also describes how to communicate with the media, policymakers and the public, including the use of social media. In addition, the manual outlines the pros and cons of establishing a political action committee.

Everyone whose activities cause the definition of “lobbyist” to apply needs to be aware of the legal requirements under federal, state and local lobbying laws, and the manual will describe those requirements, along with information on the ethics of lobbying.

The manual will be available starting in February, and it should be particularly useful to bar leaders when they attend the annual ABA Day event in Washington. The event draws more than 300 bar leaders from around the country—in 2012, every state was represented for the first time—to lobby members of Congress on specific ABA legislative priorities. This year’s ABA Day event will be held April 16-18.

“As we approach the 30th anniversary of the establishment of the NABE Governmental Relations Section, it is worth remembering the often-quoted observation by House Speaker Tip O’Neill that ‘all politics is local,’ ” says Thomas C. Barnett Jr., executive director for the State Bar of South Dakota and a past chair of the section. “The cooperation and coordination between the ABA Governmental Affairs Office and state and local bar associations in advocacy couldn’t be more critical than it is today.”