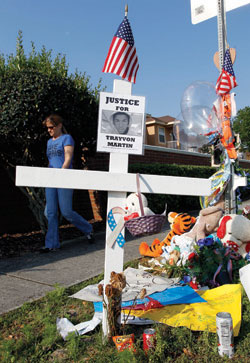 Trayvon Martin was killed near this spot in Sanford, Fla., by George Zimmerman, who claims to have acted within the parameters of Florida’s stand-your-ground law. AP Photo/Chris O’Meara

After Florida adopted the first “stand your ground” law in 2005, nearly 30 more states followed suit. The laws triggered little controversy until the night of Feb. 26, 2012, when Trayvon Martin, a young black man, was shot to death in Sanford, Fla., by George Zimmerman, a neighborhood watch coordinator in the gated community where Martin was staying. Zimmerman claimed self-defense, but a special prosecutor filed second-degree murder charges against him, and he’s now free on bond while awaiting trial.

Regardless of how that case turns out, stand-your-ground laws have become the subject of growing debate. One of the entities taking a hard look at the merits of such laws is the ABA’s National Task Force on Stand Your Ground Laws, which began its work in January.

As its first step, the task force is gathering input on the laws at a series of four public hearings. The task force held its first hearing in February during the 2013 ABA Midyear Meeting in Dallas and a second one May 2 at its Chicago headquarters. Additional hearings are scheduled for June 6 in Philadelphia and Aug. 9 during the association’s annual meeting in San Francisco.

The primary sponsor of the task force is the ABA Coalition on Racial and Ethnic Justice. At the Chicago hearing, Michael B. Hyman, an Illinois appellate court judge who chairs the coalition, articulated the key issues that the task force will address. “Do stand-your-ground laws make our society safer or more dangerous?” said Hyman. “Do they save lives, or do they take more lives? Are they neutral, or do they disproportionately impact people of color?”

Opponents of the laws express concern that they drastically extend the boundaries that define when people may defend themselves against violent attacks rather than retreat. Traditionally, the law held that there was no duty to retreat when an individual was threatened in his or her own home, but stand-your-ground laws have moved that concept outside the house.

“Stand-your-ground laws, at one extreme, could become a system tantamount to lawlessness,” said Dorothy Brown, clerk of the Cook County Circuit Court, who was one of about a dozen witnesses testifying before the task force in Chicago. She characterized states that have passed such laws as “shoot first, license to kill, ‘make my day’ states,” and she argued that such laws anoint an untrained person as “investigator, judge, jury and executioner, all in one.”

Furthermore, stand-your-ground laws are broken because they disproportionately affect communities of color, said witness Ellen E. Douglass, a vice president of the National Bar Association, whose membership is primarily black lawyers and judges. “It is imperative that the tragedy that happened to the Martin family never happens again,” she said. “Leaving the question of what is ‘justifiable force’ unresolved opens the door to copycat acts.”

Recent studies conducted at Texas A&M University and Georgia State University (in conjunction with the National Bureau of Economic Research) indicate that stand-your-ground laws have not deterred crime, according to Jack Cutrone, who is executive director of the Illinois Criminal Justice Information Authority in Chicago. He noted that the collective homicide rate in stand-your-ground states actually is on the rise. Another disturbing pattern showing up in research, he said, is that self-defense claims are significantly more likely to succeed in white-on-black killings than the other way around.

Uniform national definitions of terms like “reasonable fear” and “justifiable use of force” would help to mitigate these patterns, said the Rev. Janette C. Wilson, a former criminal defense lawyer who now is senior adviser to the Rev. Jesse L. Jackson Sr. “If we don’t have uniform national guidelines, we will see more people of certain races and religions being injured or killed without any recourse,” said Wilson, who urged bar associations to file lawsuits at the state level challenging the constitutionality of stand-your-ground laws.