“History is full of surprises. It can only prepare us to be surprised again.” —Kurt Vonnegut

After several years of surprises, the ABA’s Fiscal Year ending Aug. 31, 2010, (FY2010) was one of progress, showing promising signs of stability. When compared with the Association’s FY2009, we stabilized overall total revenue, slightly decreased operating expenses and saw investments rebound.

Past Treasurer’s Reports have focused on the ABA’s consolidated financial performance, which includes: the ABA; the Fund for Justice and Education (FJE), the ABA’s charitable or IRS 501(c)(3) entity; the James O. Broadhead Corporation, which owns and manages the ABA’s Washington, D.C., headquarters; and the inactive ABA Museum of Law. The outside audit of these entities has been completed and I am pleased to report that it was a completely “clean” audit without any suggested adjustments.

The Association’s so-called “A133” audit, which focuses only on funds the ABA receives from the federal government and conducted at the same time, was similarly without any findings. For an organization that has seen significant change in its financial services department during the past few years, this is well-deserved recognition and evidence that we are on the right track.

This is the time we traditionally look back at the Association year and evaluate our financial performance. Was our FY2010 budget a good predictor of revenue received by the Association, and did it accurately forecast how much money would be needed to support Association activities? Are ABA revenue sources trending up or down? Are we managing our expenses better or worse?

For the fiscal year ending Aug. 31, 2010, the Association’s consolidated revenues of $205.8 million were $6.6 million over the budgeted projection of $199.2 million and only $200,000 below the Association’s consolidated revenue for FY2009. The ABA’s FY2010 revenue exceeded operating expenses of $199.5 million by $6.3 million. Stated differently, the ABA’s total revenue for FY2010 was only slightly less than FY2009 and exceeded the ABA’s budgeted expenses by more than $6 million, as is shown in the chart below.

While this is good news, we need to understand the component parts of this “total revenue” number. There are two kinds of revenue: “operating income,” which comes through the door as revenue from dues, meetings, products, services and programs; and “non-operating income,” money from our long-term investments and, on occasion, from ABA reserve funds such as the Dues Warehouse.

In FY2010, the revenue from all sources of operating income was insufficient to pay our expenses. However, in August 2009, the ABA’s Board of Governors designated a certain amount from the Dues Warehouse (which is held in our long-term investment pool) as well as a specific amount of investment income to balance the ABA’s FY2010 budget. Thus, we used non-operating income to supplement what we believed would be a shortfall in our FY2010 operating income.

Not all of this $10.5 million of non-operating income was needed to fund our actual FY2010 operating expenses. Our operating revenue was higher than we predicted and expenses were lower. Without the use of our reserves and our investment income, the ABA consolidated financial statements would have shown a $4.2 million deficit for FY2010. 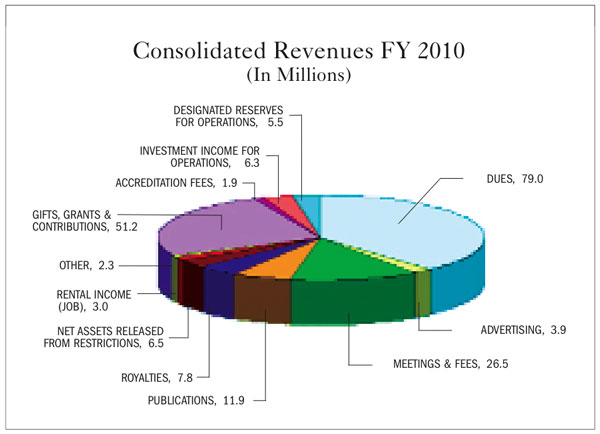 The Association’s long-term financial health depends on increasing our revenue from existing sources of income, and identifying and pursuing new income-generating products and services. This is easy to say and harder to do.

Membership dues still represent our single largest source of ABA revenue. The FY2010 budget projection of $79 million in dues revenue represented a 6 percent or $5 million decrease from FY2009. For comparison purposes, the dues revenue projection for FY2011 is $75 million, another 5 percent decline.

Many factors affect dues revenue. The economy has forced practices of all sizes to tighten budgets as they work with smaller client revenues. Lawyers, especially younger lawyers, may have different views on affiliation and associations, and the ABA needs to make the case for membership that addresses their concerns. Finally, with today’s technology, legal resources and information for lawyers are readily available online and are often free.

The ABA’s membership initiatives, including its redesigned website, are geared toward providing enhanced value and benefits to encourage new members and to retain the ones we have. Next year’s dues revenue will be key in assessing how effective our efforts have been.

In addition to the decline in dues revenue, several important non-dues revenue categories also declined from FY2009 results. ABA publication revenue declined $0.9 million or 7 percent as the marketplace shifted from paper to electronic distribution and media. In many respects, this sea change reduces operating costs and opens up new distribution channels for Association products with Amazon.com and Google.

During FY2010, the ABA renewed its affinity credit card royalty contract but at a lower rate, partially as a result of economic conditions. This change, along with lower usage, contributed to the $0.8 million or 10 percent decline in ABA royalty revenue.

On the positive side, the ABA experienced solid growth in Meeting Fees and Gifts & Grants. The ABA’s consolidated meeting fees grew $1.4 million or 5.6 percent to $26.5 million. With improvements in the economy and enhanced meeting scope and content, this revenue category is expected to continue to grow.

For the second year in a row, there has been substantial growth in the Gifts & Grants categories (which includes $6.5 million in Grant net assets released from restrictions), particularly the ABA’s Rule of Law Initiative (ROLI). FY2010 revenue from these categories of $57.7 million exceeded FY2010 budget by $7.2 million or 14 percent and represents a 7.7 percent increase over FY2009 revenues. Only six months into FY2011, grant activity continues to be strong.

The figure below shows a summary of the consolidated revenue sources. 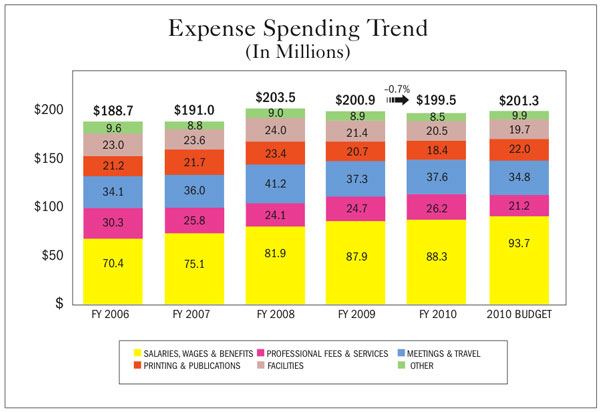 As in the past several years, ABA revenue decline has been offset by the careful and sustained management of the Association’s expenses. Consolidated FY2010 operating expenses ended the year under budget and even slightly under FY2009 actual numbers. For FY2010, consolidated operating expenses were $199.5 million, approximately $1.8 million or 1 percent under budget. Expense savings, which occurred primarily in the Compensation & Benefits, Printing & Publications and Other categories were offset by expense increases in Professional Services and Meetings & Travel.

Employee Compensation & Benefits represents 44 percent of the Association’s consolidated operating expenses. For FY2010, Compensation & Benefits were $88.3 million, $5.4 million or 5.8 percent under budget. Part of this saving was the result of shifting some of these expenses to the Professional Services category as vacant positions, particularly in Financial Services, were temporarily filled until permanent employees were hired. For the most part, vacant positions were not filled.

Printing & Publications consolidated expenses during FY2010 were $18.4 million, $3.6 million under budget and $2.3 million less than actual FY2009 expenses. The factors contributing to this reduction included a change in the way ABA inventory is expensed, better management of vendor costs and, ironically, a reduction in publication revenue, with the obvious result of reducing related expenses as well.

One of the most uncertain expense categories this past year has been cost of travel. Not surprisingly, the ABA’s Meetings & Travel expense category was $37.6 million in FY2010, $2.8 million over budget and about $300,000 more than FY 2009. This category, although difficult to manage with the uncertainty and fluctuations in travel costs, is essential to the continuation of successful member meetings and events.

The diagram below provides a summary of the ABA’s expense trends. Perhaps the most significant fact is the decline of $4 million in the ABA’s consolidated expenses from FY2008 to FY2010.

As noted earlier, the ABA’s financial performance is a result not only of its consolidated revenue and expenses but of the effect of certain non-operating items, including investment income, pension-related charges and the Dues Warehouse transfer from Association reserves to operating funds discussed above.

In FY2009, for the reasons we discussed last year, the net change in the ABA’s pension liability was a staggering $31.4 million. For FY2010, the net change was $4.7 million, still negative but certainly a significant improvement over FY2009.

The change in the ABA’s inventory accounting netted against certain accruals resulted in another non-operating positive item of $1.1 million, which also contributed to the increase in the ABA’s net assets. 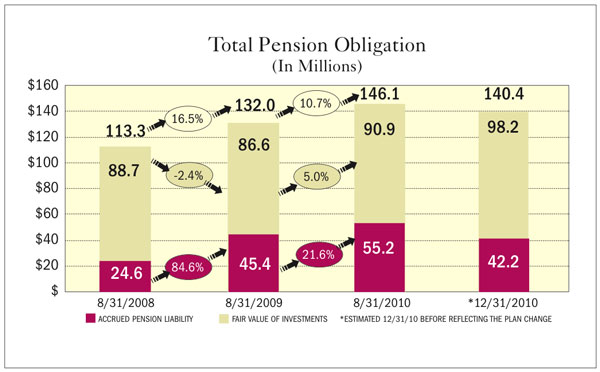 Key Items on the ABA’s Statement of Financial Position

A. The ABA’s DB Pension Liability

The following chart illustrates changes in the ABA’s DB pension plan unfunded liability. Note that as of Dec. 31, 2010, a mere four months after the calculation affecting the ABA’s Statement of Financial Position, the ABA’s DB pension plan assets had increased more than $7 million as a result of improved market conditions and its “unfunded liability” had decreased by $13 million as a result of the use of a higher discount rate.

In 2010, the ABA reduced the benefit obtainable under the DB pension plan for future service. The benefit accrued by DB plan participants would be equivalent to approximately 5 percent of annual salary which, not coincidentally, is the amount paid under the ABA’s defined contribution (DC) pension plan. Employees hired on or after Jan. 1, 2007, are not eligible to participate in the DB pension plan but are included in the ABA’s DC plan.

B. The ABA’s Cash Flow Management

Another important item of the ABA’s Statement of Financial Condition is cash on hand as of Aug. 31. However, given the cyclical nature of the Association’s dues revenue collected, more than 60 percent of dues revenue is received by the end of August but represents receipts for the following fiscal year. This situation creates a cash rich position at the beginning of each fiscal year and a cash poor position at the end.

As noted earlier, ABA revenues have been declining over the past few years. Operating expenses have been flat over the past few years. The use of designated reserves as revenue to cover operating costs does not necessarily result in cash to pay the Association’s bills. During FY2010, when the ABA was required to make a large cash payment to the DB pension plan and revenues declined, the Association found itself low on cash and borrowed about $5 million in late May 2010. This borrowed amount was fully paid back before the end of FY2010. Even with improved cash management, the ABA’s cash and cash equivalents balance at the end of FY2010 was $28.2 million, a reduction of $600,000 or 2 percent from the ABA’s cash position the prior year. Timely billing and collections will help to maintain our cash position.

Some of the items on the ABA’s Statement of Financial Position reflected positive growth, as can be seen by the $7.5 million asset increase in FY2010. The most significant of these increases occurred in the accounts receivable, inventory and long-term investments categories.

During FY2010, the ABA’s accounts receivable increased by $1.9 million or 13 percent. Part of this increase is attributable to a successful negotiation regarding outstanding royalties. The remainder was related to better management of grant reimbursements.

These have been interesting and challenging times to be the Treasurer of anything, let alone an organization as large and complex as the American Bar Association. Your support and encouragement have been humbling and gratifying and I thank you. Larry Gill, our new Chief Financial Officer known for his long service as an ABA member and as the Chair of the Standing Committee on Audit, has already made a significant and positive contribution to the Association’s financial services operations. With the improving economic climate and the energy evident throughout the Association, we are poised to make some very important changes we have talked about. I look forward to seeing the results of these initiatives and to sharing with you the success which is yet to come.