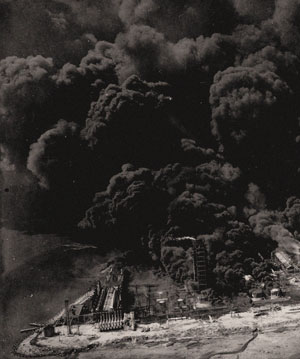 Even before the end of World War II, the U.S. began to repurpose its wartime manufacturing for peacetime, and one of the first industries targeted was munitions production. As early as 1943, some factories previously devoted to the development of explosives began conversion to the manufacture of fertilizer for large-scale agriculture.

Postwar food shortages in Europe created a sense of urgency, so government officials continued their wartime supervision of private manufacturers to create fertilizer-grade ammonium nitrate, a coated and bagged version of the highly volatile chemical for shipment overseas.

On the morning of April 16, 1947, two French-controlled ships were being loaded with FGAN at the port terminal on Galveston Bay in Texas City, Texas, when smoke was spotted in the hold of one of them, the SS Grandcamp. At first, longshoremen were more concerned with a small cache of munitions from Belgium than the 1,850 tons of fertilizer already loaded aboard. But the steam they forced into the hold only seemed to make matters worse, as broad billows of smoke attracted the city’s entire fire department dockside, as well as scores of spectators.

The first explosion came at 9:12 a.m., launching debris and shrapnel 2,000 feet into the air and fireballs across Galveston Bay. The blast collapsed houses, leveled warehouses, sparked fires at nearby refineries and destroyed an entire chemical plant. It also set fire to the second ship bound for France, the SS High Flyer, which held more than 1,000 tons of ammonium nitrate; about 15 hours after the first blast, a second ripped across the city. In all, 568 were killed, 3,500 were injured and a large part of Texas City was destroyed. 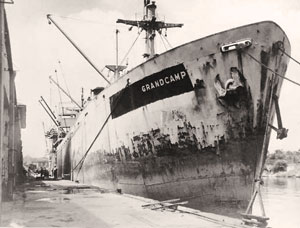 Elizabeth Dalehite, the widow of a ship’s captain killed in the blast, was one of some 8,500 claimants who filed 300 lawsuits against the federal government. The suits alleged negligence under the recent and controversial Federal Tort Claims Act (1946), which allowed private citizens—with certain exceptions—a right to sue government officials for damages.

In order to save countless repetitions of evidence, a federal judge in Texas combined the 300 cases into what the Supreme Court later described as “a test case” plea for the entire class. In a nonjury trial, the judge declared the government liable, citing “blunders, mistakes and acts of negligence” by federal officials. His ruling was reversed at the 5th U.S. Circuit Court of Appeals at New Orleans, clearing the way for the nation’s first class action to be heard by the Supreme Court.

In 1953 in Dalehite v. U.S., the government argued that the Federal Tort Claims Act had been intended to compensate citizens for small-scale accidents, not $200 million catastrophes. Moreover, the decision to make, bag and ship the fertilizer, however dangerous, was one of government discretion—one of the specific exemptions to the FTCA. In a 4-3 decision, the high court agreed.

In dissent, Justice Robert Jackson cringed at the logic that dismissed government culpability for the Texas City tragedy, as if for a hurricane.

“Surely a statute so long debated was meant to embrace more than traffic accidents,” he continued. “If not, the ancient and discredited doctrine that ‘the King can do no wrong’ has not been uprooted; it has merely been amended to read: ‘The King can do only little wrongs.’ “

This article originally appeared in the April 2016 issue of the ABA Journal with this headline: “April 16, 1947: Explosion leads to first class action.”