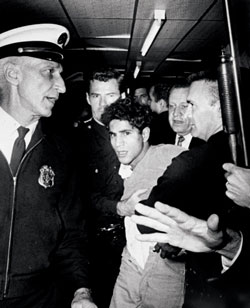 “Now it’s on to Chicago, and let’s win there”: That was Robert F. Kennedy’s closing exhortation to a jubilant crowd of supporters who had gathered at the Ambassador Hotel in Los Angeles to celebrate his victory in the California primary. But the celebration abruptly became a vigil, for Kennedy was shot at point-blank range as he was being escorted through a kitchen pantry on his way to a press conference; 25 hours later, on June 6, 1968, he was pronounced dead at the age of 42.

The alleged assailant, Palestinian immigrant Sirhan Sirhan, refused to give his name after being taken into custody, but his two brothers identified him after seeing his picture in news accounts. They consented to a search of Sirhan’s room at their Pasadena home, where police found books on the occult and notebooks filled with garbled rants and repetitive phrases, some of which seemed to suggest he had targeted RFK.

Aiming to spare him the gas chamber, Sirhan’s lawyers resorted to a “diminished capacity” defense, arguing that he lacked the resources to fully grasp the gravity of his actions; and that at the time of the shooting, “he was out of contact with reality, in a trance in which he had no voluntary control over his will, his judgment, his feelings or his actions.” The jury, however, agreed with the prosecution, which portrayed Sirhan as a calculating, cold-blooded assassin, and found him “alone and not in concert with anyone else” guilty of first-degree murder.