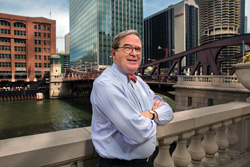 Hulett “Bucky” Askew: “The time has come to do something different.” Photo by Wayne Slezak.

Hulett H. “Bucky” Askew, the ABA’s consultant on legal education, is calling it quits. After holding the job for six years, he will step down at the end of August.

Askew is the key staff adviser to the Section of Legal Education and Admissions to the Bar, which is designated by the U.S. Department of Education as the accrediting body for U.S. law schools.

Having recently turned 70, Askew says his departure from the ABA is not a retirement move. “The time has come to do something different,” he says. “It’s a natural sort of thing.”

Askew, who lives in Chicago, where the section’s staff offices are located, also cited the travel demands of the job, which requires him to spend 30 weekends each year on the road. He plans to return to his hometown of Atlanta, where his wife, Cathy, lives and works.

Askew served during a time of change and turmoil for American law schools, which have come under fire in recent years for increasing tuitions, misleading prospective students about career opportunities and failing to adequately prepare students to be effective practitioners. The legal education section council has caught some of that flak for not putting more pressure on law schools to release adequate consumer information, and some law schools have complained about the section’s decisions to deny them accreditation. The section is four years into a major review of its law school accreditation standards.

A statement issued by the ABA on April 23 said Askew “has been especially effective in strengthening relationships with the leadership of the law schools that the council accredits and serving as a calming influence during a period of uncertainty in legal education.” The statement also praised Askew as a “highly effective leader, fostering positive interactions among committees of the Section of Legal Education and Admissions to the Bar and restoring a collaborative working atmosphere for the section staff.”

Section chair John F. O’Brien said, “The ABA and the legal education community have been fortunate to benefit from Bucky’s wisdom and talent for six years. We wish him the very best as he returns to his home in Atlanta.” O’Brien is dean at New England School of Law in Boston.

As of June 4, Askew’s duties were being handled on an interim basis by Barry Currier, dean emeritus of Concord Law School, the nation’s first online law school. Currier previously served a four-year stint as deputy consultant on legal education. The section planned to start the search for Askew’s permanent replacement soon after Currier’s arrival.