ABA Day in Washington has become a rite of spring for bar leaders from around the United States. So it was fitting that the cherry blossoms lining Washington’s Tidal Basin were peaking in early April just as some 350 lawyers from 49 states and the District of Columbia arrived on Capitol Hill for meetings with members of Congress to discuss issues of importance to the legal profession.

This year’s edition of ABA Day in Washington, which is coordinated by the Governmental Affairs Office, was held April 8-10.

“Members of Congress rate constituent visits among the most important things they do, and past experience shows us that when a constituent lawyer travels to Washington just to talk about issues of importance to our justice system, these special efforts work,” says Linda A. Klein, a shareholder at Baker, Donelson, Bearman, Caldwell & Berkowitz in Atlanta who chairs the ABA Day Planning Committee. “ABA Day allows lawyers to create lasting relationships with congressional delegations and key staff members, and helps the ABA public policy team better represent our profession.”

Participants focused on two major areas of concern: the need for increased funding for the Legal Services Corp., and the ABA’s opposition to a tax proposal that the association maintains would impose substantial new financial burdens on many law firms.

Bar leaders stressed the impact of federal funding for civil legal services programs on individual states and congressional districts when they urged members of Congress to fund the LSC at the Obama administration’s requested minimum of $430 million for fiscal year 2015, which starts this Oct. 1. They pointed out that more Americans than ever—63.5 million—qualify for civil legal aid provided by local offices that receive LSC funding. Last year, strong lobbying efforts by the ABA and state and local bar associations resulted in a $365 million appropriation—a $25 million increase despite federal budget constraints.

ABA Day participants also asked their representatives and senators to remove mandatory accrual accounting provisions from draft tax-reform legislation being con-sidered in both the House and Senate. The provisions would affect law firms and other types of personal services businesses with annual gross receipts of more than $10 million by requiring them to use the accrual method of accounting rather than the traditional cash receipts and disbursement method.

The ABA says the legal profession would suffer even greater financial hardship than other professions because many lawyers and law firms are not paid by their clients until long after the work is performed. 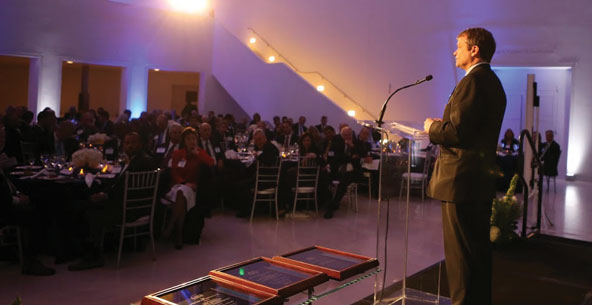 One of the important aspects of ABA Day is the opportunity to recognize members of Congress and bar leaders for their work on issues of critical importance to the association and the administration of justice.

The ABA presented grassroots advocacy awards to Chief Justice David E. Gilbertson of the South Dakota Supreme Court and Thomas C. Barnett Jr., executive director of the State Bar of South Dakota, recognizing the successful partnership between the state’s bench and bar. The ABA also presented grassroots advocacy awards to Stephen A. Saltzburg, a professor at George Washington University Law School in Washington, D.C., and a past chair of the ABA’s Section of Criminal Justice; and retired Army Col. Mark E. Sullivan, now a family lawyer in Raleigh, N.C., and a past chair of the Standing Committee on Legal Assistance for Military Personnel.

As the meetings wrapped up, ABA President James R. Silkenat urged participants to continue their work on the issues when they return home. “ABA Day has always been about more than just one day,” said Silkenat, a partner at Sullivan & Worcester in New York City. “We come here annually, but after today we do not stop caring about the LSC or other issues important to the legal profession.”

This article originally appeared in the June 2014 issue of the ABA Journal with this headline: “Right on Schedule: Bar leaders take their annual springtime lobbying trek to Capitol Hill.”