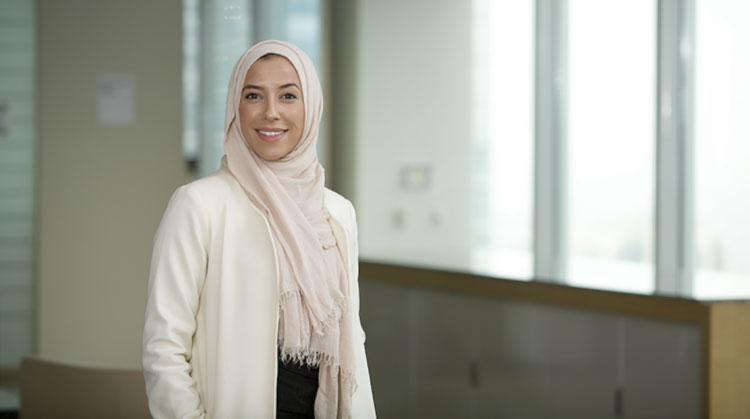 Iman Boundaoui grew up knowing that good fortune is not earned.

“You don’t choose the circumstances that you were born into,” she says. “Fortune is a gift. So you think: How can you use it to empower people, to inspire people, to encourage people?”

She learned a lot about that by watching her father.

An immigrant from Algeria, Boundaoui’s father worked two jobs while he earned his Ph.D. in math and statistics. Once his career took off, he was driven to help other immigrants.

Every Saturday, he provided free computer classes in a small office that he rented and equipped. His class grew from one or two students to a couple dozen, all eager to improve their chance for employment.

“I saw that, and I learned from that,” says Boundaoui, now a civil litigator at Drinker Biddle & Reath in Chicago and a member of the ABA Young Lawyers Division. “I grew up with a passion for that.”

That passion drove her to become a coordinator of the Travelers Assistance Project, launched as a rapid response to President Donald J. Trump’s executive orders on travel in January.

Boundaoui was among 300 Chicago-area lawyers who volunteered to help at-risk travelers at O’Hare International Airport’s Terminal 5.

She sat with families whose relatives were questioned for up to six hours by U.S. Customs and Border Protection.

She counseled travelers who inadvertently waived their green card rights because they thought they were helping expedite the process.

She consoled tourists whose valid visa dates were slashed from six months to 12 days.

“They didn’t even know it was happening,” Boundaoui says. “And you have no right to legal representation unless you’re an American citizen.”

When the courts rejected the travel ban, Boundaoui watched for a response from the CBP. It wasn’t what she expected.

Of course, the CBP has the ultimate discretion to pull people into secondary inspection. But there’s a different environment, which appears to be discriminatory, she says.

Immigration lawyers have confirmed her fears, saying they see an intensity in border inspections unlike anything they have ever experienced. The most likely targets are foreign nationals from developing countries, Boundaoui says.

Operating under the umbrella of the Council on American-Islamic Relations in its Chicago office, the Travelers Assistance Project maintained an on-site presence at O’Hare long after the effort ended at most metropolitan airports. Lawyers were available 18 hours per day, every day of the week, for four months.

CAIR also created a website, which helped the volunteers organize and allowed foreign travelers to submit their itineraries, so Chicago lawyers could watch for them.

TAP eventually left the airport and was coordinating with travelers through the website and by phone.

However, a U.S. Supreme Court opinion in late June that allowed parts of the travel ban to take effect for some foreign nationals sent TAP lawyers back to O’Hare just before Independence Day weekend. Boundaoui says volunteers planned to stay for at least a couple of weeks, staffing two five-hour shifts daily to monitor the effects of the ruling.

“We continue to see the same treatment,” she says. “We don’t really sense a huge difference.”

However, she says, that could change when the cap on refugees, set at 50,000, is reached. She is uncertain what will happen to refugees who had obtained the appropriate documents or were working with resettlement agencies.

“This isn’t the first or the last fight for justice we’ll have under this administration,” says Boundaoui. “And we have to leverage the energy while people still care.”

The group has grown to more than 1,400 lawyers, students and social service providers in the Chicago area. They volunteer when local human rights organizations express a need.

IN HER FATHER’S FOOTSTEPS

Helping others is a legacy for Boundaoui that was instilled by her father, who died when she was 11. She remembers with amazement the outpouring of support from the community. To this day, she encounters people who stop her to talk about how her father touched their lives.

She hopes to follow in his footsteps. “I feel it’s the most important thing. When I leave this world, I want to look back and say, ‘I didn’t lose sight of that,’ ” she says.

As she strives to live up to her father’s values, she acknowledges a different type of struggle sparked by another family legacy.

Boundaoui has worn a hijab for 13 years. It creates a barrier with so many people, she says, evoking the stereotypes and biases about covered women.

“The hardest thing I’ve faced didn’t happen in a single moment,” she says. “It wasn’t an event. It’s for people to see me for who I am—my character, my value and my personality—in the state that I am as a covered woman.”

There’s always a wall, she says, and covered women “are the ones who have to fight to bring that wall down. There’s a ‘social tax’ you pay for looking different, and you know when that tax is expected.”

Steeled by her convictions, Boundaoui is willing to pay the social tax. She works harder to connect with people who are distracted by her hijab.

In the course of it all, she’s learned a lot about how people come together when they think their values are under attack. She says the human potential for love and caring is immense.

“I saw that come to life in Chicago in such an incredible way,” she says. “There is a shining light in all of us.”

Members Who Inspire is a new ABA Journal series where we will profile exceptional ABA members. If you know of members who do unique and important work, you can nominate them for this series by sending a note to [email protected].

This article first appeared in the September 2017 ABA Journal magazine under the title "Lifting a Lamp."