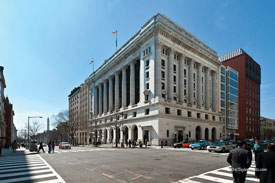 The association will move from this historic building, just a block from the White House, to a nearby location more suitable to staffing needs. Photo courtesy of ABA Media Services.

The ABA recently sold an office building in Washington, D.C., that it had owned since 1994. The sale, which closed on Dec. 16, means the association will lease space at another location in central Washington.

ABA officials say the transaction will produce financial benefits for the association, as well as open the way for a move to space that will be more suitable to the needs of some 240 staff members and more friendly to members coming to Washington on association business.

“We have been fortunate to sell the building at the top of the real estate market in Washington, D.C.,” ABA President Wm. T. (Bill) Robinson III told the ABA Journal a few days after the closing. And while the building was a historic structure located just a block from the White House, it also “was a labyrinth of office space that was inefficient,” said Robinson, the member in charge of the Florence, Ky., office of Frost Brown Todd.

The ABA sold its building at 740 15th St. N.W. to JBC Funds 740 LLC, a subsidiary of the John Buck Co. in D.C. “We look forward to renovating this architectural landmark and reintroducing it to the market as a classic masterpiece with state-of-the-art modern features,” says John A. Buck II, JBC’s chairman and CEO.

The sale price was just over $69 million. The association will earn “a fair amount” from the sale, says ABA Executive Director Jack L. Rives. The net profits will be used to help offset rental costs in Washington, in accordance with a resolution adopted by the Board of Governors before the sale.

The ABA’s purchase of the building 17 years ago “turned out to be a very good investment,” says Rives, but selling it makes sense, too. The Washington staff was never big enough to occupy the entire building, and the ABA leased more than half of the space to other tenants. When a major tenant announced it would leave the building by the end of 2011, and with other leases scheduled to run out by 2014, there was a good opportunity to assess the association’s office needs in Washington.

“To get the right location in Washington and to avoid getting back into the ‘landlord business,’ it makes sense to rent at this time,” says Rives.

The ABA also leases space for its headquarters in downtown Chicago. In June, the association agreed to extend its lease for 201,000 square feet of office and meeting space at 321 N. Clark St., just north of the Chicago River, through June 30, 2024. Some 670 staff members work out of the Chicago office.

Studley, an international commercial real estate services firm headquartered in New York City, has assisted the ABA on its lease negotiations and the sale of the Washington building.

As 2011 came to an end, the association had not yet announced what its new address in Washington would be, but Rives said then that a lease was being negotiated for space about five blocks from the building on 15th Street. The ABA is seeking to rent about 60,000 square feet of space that would be located on one floor.

The sale agreement on the current building includes a lease-back agreement that will allow the ABA to occupy its offices through August 2013, if necessary, although the plan is to be in the new location earlier that year, Rives says.

It’s not too early to start planning for the move, says James W. Swanson, senior director of the Washington office. Among other things, he says, the move will be a good opportunity to digitize a lot of paper files.

Leaving also will trigger some mixed emotions, says Swanson. The current location “is not a great building in terms of the synergy of working together on the same floor,” he says. Staff offices were spread out over seven floors, and even regular visitors sometimes had trouble finding their way around.

Nevertheless, he says, “there might be an emotional tug as we walk out the door. After nearly 20 years, you become emotionally attached to a place.”