Chill with the P-Law All-Stars 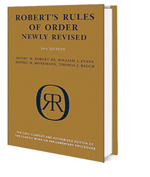 If you’ve ever represented an organization that holds regular meetings, chances are you’ve encountered issues of parliamentary procedure.

Already a Robert’s Rules regular? Then the newly formed American College of Parliamentary Lawyers might be a group worth meeting.

“The hope is that, as organizations or governments look at delving into procedural issues, they would know about a body of lawyers who spend a good deal of time working in this area,” says ACPL president and founding member Jim Slaughter. He’d also like the group to become a resource for any lawyer who’s suddenly asked to provide advice on a point of order; it’s not uncommon for clients to assume their lawyers must have picked this up in law school, he says.

Joining the ACPL requires a bit more than a quorum: Applicants must hold a certification from one of two official parliamentarian associations and show they’ve made significant contributions to the field. Membership dues are $50 a year, and the application-approval process takes about a month. The group has a website and an online discussion forum; its inaugural meeting was held last fall in Omaha, Neb. (and yes, it followed a Robert’s Rules format, albeit one modified by college bylaws).

So far, 25 lawyers have signed on, many of whom are front-and-center on major issues like the revisions to the ABA Model Nonprofit Corporation Act, says Slaughter, a partner in the Greensboro, N.C., firm Forman Rossabi Black.

He expects membership will grow as word spreads, and he would eventually like to accept members who aren’t officially credentialed. “So many lawyers, when I talk to them, realize they have to deal with these issues all the time.” Tapping into the ACPL knowledge base, he says, “they’ll know what’s been dealt with before, and they’ll know they don’t have to start from scratch.”