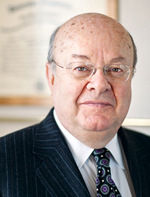 From the very beginning of her term as ABA president in August, Carolyn B. Lamm has been emphatic about the need to increase the association’s advocacy with federal policymakers on issues of interest to the profession and the public. “Issues arise daily that require us to be heard and be visible,” says Lamm, a partner at White & Case in Washington, D.C. “We must be credible, prominent advocates on important issues and preserve the rule of law.”

To accomplish this goal, Lamm called on the Standing Committee on Governmental Affairs, chaired by Bill Robinson, and the staff of the Governmental Affairs Office, headed by Thomas M. Susman, to develop strategies to assure that the ABA’s views are known and valued on Capitol Hill and within the various entities that make up the executive branch. (Robinson, a member of Frost Brown Todd who heads its northern Kentucky office in Florence, will become the ABA’s president-elect nominee during the midyear meeting this month.)

Much of this work is done by the Grassroots Action Team, a network of ABA members who communicate, as constituents, the ABA’s views to their members of Congress through personal meetings and correspondence. Particularly important are the “grasstops” advocates, who have close working relationships with members of Congress. They contact their senators and representatives in pressing situations when the ABA seeks quick legislative action on priority issues.

ABA members who join the Grassroots Action Team have access to an interactive website maintained by the Governmental Affairs Office; are invited to attend advocates meetings; and receive the ABA Washington Letter, a monthly e-mail report on the association’s advocacy efforts.

SECTIONS HAVE THEIR SAY

Another key to the ABA’s advocacy efforts is ABA day in Washington, an annual lobbying event that brings leaders of the association as well as state, local and specialty bar associations to Capitol Hill for face-to-face meetings with their senators and representatives to discuss legislative priorities of the legal profession.

“The Grassroots Action Team and ABA Day bring together those who are passionate about justice issues,” says Julie M. Strandlie, director for ABA grassroots operations in the Governmental Affairs Office. “We want to open up these activities to more ABA members who have connections and want to put those connections to use helping people and improving the justice system.”

As part of this effort, the governmental affairs committee is encouraging ABA sections to host their own lobbying events in Washington.

In the fall, the Governmental Affairs Office coordinated visits to Capitol Hill by members of the Section of Environment, Energy and Resources, which announced the launch of a webpage available only to congressional members and staff.

In October, 18 leaders of the Section of Individual Rights and Responsibilities visited the Hill during their own lobbying day. They spoke to members of Congress about a number of the section’s policy priorities and covered several issues on the ABA agenda, including funding for the Legal Services Corp. and loan forgiveness for legal aid attorneys.

“My experience was that this type of activity has an outstanding benefit for the American Bar Association,” says section chair Richard J. Podell, who heads up his own firm in Milwaukee. “While we pass many resolutions in the House of Delegates, we must take the next step and advocate our positions to Congress and the executive branch to ensure that these important policies become law.”